Can Uncertainty Be A Good Thing For Investors? – ValueWalk Premium

Can Uncertainty Be A Good Thing For Investors?

Does macroeconomic uncertainty increase or decrease aggregate growth and asset prices? To address this question, we decompose aggregate uncertainty into ‘good' and ‘bad' volatility components, associated with positive and negative innovations to macroeconomic growth. We document that in line with our theoretical framework, these two uncertainties have opposite impact on aggregate growth and asset prices. Good uncertainty predicts an increase in future economic activity, such as consumption, output, and investment, and is positively related to valuation ratios, while bad uncertainty forecasts a decline in economic growth and depresses asset prices. Further, the market price of risk and equity beta of good uncertainty are positive, while negative for bad uncertainty. Hence, both uncertainty risks contribute positively to risk premia, and help explain the cross-section of expected returns beyond cash flow risk.

To illustrate these two types of uncertainties, it is instructive to consider two episodes: (i) the high-tech revolution of early-mid 1990's, and (ii) the recent collapse of Lehman Brothers in the fall of 2008. In the first case, and with the introduction of the world-wide-web, a common view was that this technology would provide many positive growth opportunities that would enhance the economy, yet it was unknown by how much? We refer to such a situation as `good' uncertainty. Alternatively, the second case marked the beginning of the global financial crisis, and with many of the ensuing bankruptcy cases one knew that the state of economy was deteriorating – yet, again, it was not clear by how much? We consider this situation as a rise in `bad' uncertainty. In both cases, uncertainty level rises relative to its long-run steady-state level, yet, the first case coincides with an optimistic view, and the second with a pessimistic one.

FedEx Corporation (NYSE:FDX) is having a superb day today, stock is up 6.8 percent on wild rumors that this could be the one that Bill Ackman is buying. In short,... Read More

Whitney Tilson's presentation on Berkshire Hathaway. Get The Full Warren Buffett Series in PDF Get the entire 10-part series on Warren Buffett in PDF. Save it to your desktop, read it... Read More 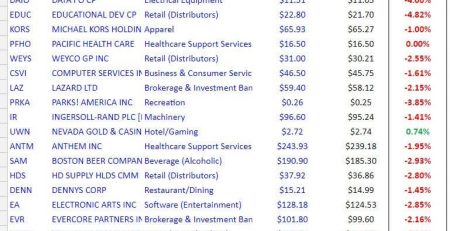