Carl Icahn Asks eBay: Why Is Mr. Cook Still On The Board – ValueWalk Premium

Carl Icahn Asks eBay: Why Is Mr. Cook Still On The Board

In our February 24, 2014 letter to eBay stockholders,(1) we raised what we consider to be serious and direct questions regarding corporate governance at eBay, with particular focus on the conduct of CEO John Donahoe and directors Marc Andreessen and Scott Cook.

In its reply to our letter, eBay seeks to simply cast aside these matters as “cherry picked old news clips”(2) and informs us that Mr. Andreessen and Mr. Cook are “two of the most respected, accomplished and value-driven technology leaders in Silicon Valley.”(2)  There is no question that they are accomplished and value-driven, but we believe the primary problem, among other things, is that they appear to be value-driven for themselves,personally profiting while costing eBay stockholders at least $4 billion.

Message to the eBay Board:  Corporate Governance Failures Do Not Have A Shelf-Life.  The simple and, to us, disturbing fact is that eBay sold a controlling stake in Skype to a sitting board member (Mr. Andreessen) and Silver Lake, for about $1.9 billion.  A mere 18 months later, that board member sold Skype to Microsoft for $8.5 billion,(4) thereby netting a $4 billion gain for himself and Silver Lake that should have accrued to eBay stockholders.  Whether this occurred 2, 5 or 10 years ago is irrelevant, especially when that board member is still on the board!  The phenomenal payday for Mr. Andreessen and Silver Lake raises serious red flags.  It is therefore particularly galling that management continues to hold this transaction out as an example of the board acting “objectively.”(5)  Further, from where we sit, the fact that a similar set of circumstances happened again in the case of Mr. Andreessen’s investment in Kynetic, which netted $150 million in paper profits for Mr. Andreessen,(6,7,8) shows a troubling pattern at eBay.

Why is Mr. Cook still on the board of eBay?  In our letter we questioned whether Mr. Cook should remain on the eBay board since Intuit (a company in which Mr. Cook owns nearly $1 billion in stock) and PayPal are fierce competitors.  eBay replied that the overlap between Intuit and PayPal is small and disclosed, but this response misses what matters most, which is that both company’s share the same long-term common strategic goal to build strong payment processing businesses.  eBay’s recent $800 million acquisition of Braintree(6) highlights the company’s commitment to credit card “processing”, an area in which Intuit is a direct competitor.  “PayPal Here”, an identical product to Intuit’s “GoPayment”, was released to significant fanfare in the marketplace.(7,8)  These products compete directly.  Is it good for PayPal to have a competitor in the board room gaining insights into its operations, product pipeline and proprietary technologies?  We believe that Mr. Cook’s participation in strategic discussions on both sides of the table will continue to present challenges for eBay and will eventually, if it has not happened already, become a major strategic disadvantage for eBay.

Stockholders:  Please ask yourself: If you ran your own company, would you ever allow your competitors to sit at the table as you planned and executed your business strategy?  We believe the obvious answer is NO!

We believe corporate governance at eBay is dysfunctional.  Let’s end this charade.  We hope you will VOTE FOR OUR SLATE OF DIRECTORS and afford us the opportunity to represent and serve ALL eBay stockholders as members of the eBay Board.   We also urge you to vote in favor of our precatory proposal in order to send a clear message to the eBay Board that eBay and PayPal must be separated – NOW.

IN THE COMING WEEKS WE WILL LAY OUT THE FULL DETAILED BUSINESS CASE TO SUPPORT THIS SEPARATION, WHICH HAS ALREADY RECEIVED STRONG SUPPORT BY KNOWLEDGEABLE AND AUTHORITATIVE INDUSTRY COMMENTATORS.  WE APPRECIATE ALL OF THE SUPPORT WE HAVE RECEIVED FROM OUR FELLOW STOCKHOLDERS AS WE COLLECTIVELY STAND UP TO MR. DONAHOE AND THIS BOARD. 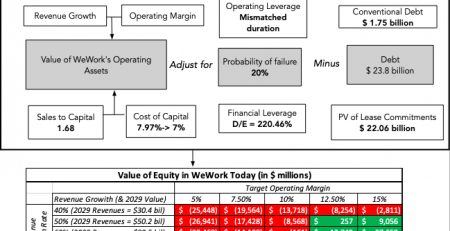 Since my pre-IPO post on WeWork, where I valued the company ahead of its then imminent offering, much has happened. The company’s IPO collapsed under the weight of its... Read More