Mr. Icahn believes that the current environment continues to be conducive to activism

Across all of our businesses. our success is based on a simple formula: we seek to find undervalued companies in the Graham & Dodd tradition. a methodology for valuing stocks that primarily looks for deeply depressed prices. However, while the typical Graham & Dodd value investor purchases undervalued securities and waits for results, we often become actively involved in the companies we target. That activity may involve a broad range of approaches, from influencing the management of a target to take slaps to improve sharehotler value. to acquiring a controlling interest or outright ownership of the target company in order to implement changes that we believe are required to improve its business, and than operating and expanding that business. This activism has brought about very strong returns over the years.

Several of our operating businesses started out as investment positions in debt or equity securities. held either directly by our investment segment or Mr. Icahn. Those positions ultimately resulted in control or complete ownership of the target company. In 2012. we accquired a controlling interest in CVR Energy. Inc. (“CVR”) which started out as a position in our Investment segment and is now an operating subsidiary that comprises our Energy segment. As of April 30. 2015. based on the closing sale price of CVR stock and distributions since we acquired control. we had a gain of approximately 52.1 billion on our purchase of CVR. The recent acquisition of CVR. like our other operating subsidiaries. reflects our opportunistic approach to value creation. through which returns may be obtained by. among other things. promoting change through minority positions at targeted companies in our Investment segment or by acquiring control of those target companies that we believe vie could run more profitably ourselves.

During the next several years. we see a favorable opportunity to follow an activist strategy that centers on the purchase of target stock and the subsequent removal of any barriers that might interfere with a friendly purchase offer from a strong buyer. Alternatively, in appropriate circumstances. we or our subsidiaries may become the buyer of target companies, adding them to our portfolio of operating subsidiaries. thereby expanding our operations through such opportunistic acquisitions. We believe that the companies that we target for our activist activities are undervalued for many reasons. often including inept management. Unfortunately for the individual investor, in particular, and the economy, in general, many poor management teams are often unaccountable and very difficult to remove.

Reading Capital letter to investors for the month ended May 31, 2016. Dear Partners, For the month of May 2016 the fund yielded a 2.7%, net return to Investors, against a... Read More

Buybacks will benefit stocks with high total shareholder return even though there are better ways to spend, say Goldman Sachs analysts Read More

Paul Craven is a coach, consultant and public speaker in the area of Behavioral Finance. His talk on "The Mind, Markets and Magic" reveals why human beings have hardwired... Read More 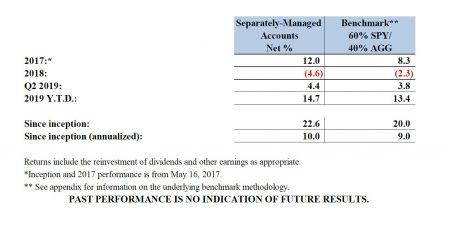 In his 2016 Shareholder Letter, Warren Buffett discusses the two things you should never forget during scary periods. Here’s an excerpt from the letter: Q4 2021 hedge fund letters, conferences... Read More

There has been a sharp fall in the number of listed stocks in the US since 1996 with listings falling by roughly 50% in the US over the past... Read More