I looked at this topic back in late August where I outlined the reasons why copper/gold looked to be near a turning point and why it is such a useful macro indicator.

That article was about week off the absolute low point (at least for now), but I’m not here to pat myself on the back, rather I want to share a few thoughts on what has changed and perhaps more importantly – what has stayed the same since then.

In one line, my view that global growth is set to rebound is unchanged, but what has changed is that we have seen what pretty clearly looks to be the inflection point in the macro indicators.

It seems clear that the copper/gold ratio has put in a cyclical bottom, and to add to that: bond yields are turning up, the global manufacturing PMI has stopped falling, and a number of other markets/indicators are confirming this apparent inflection point.

Turning points like this (if true) are a big deal, so let's review some charts…

First let’s quickly revisit one of the core charts. The below shows the copper/gold ratio against the US 10-year treasury.  The economic logic is that copper is sensitive to growth (particularly China, and China plays an increasingly important role in the global growth/risk cycles), meanwhile gold is sensitive to risk hedging demand, and shifts in real yields.  Basically (and I mean basic, as in over-simplifying, just to illustrate) copper goes up when sentiment is bullish and growth is improving, gold goes up when sentiment is bearish and growth is faltering.  Given treasury yields are essentially a reflection of hedging demand (risk sentiment) and the growth/inflation outlook, it’s logical that the two series should be correlated and confirming (or otherwise) to each other.  In this sense it is meaningful that both have rebounded from what appears to be a cycle low. 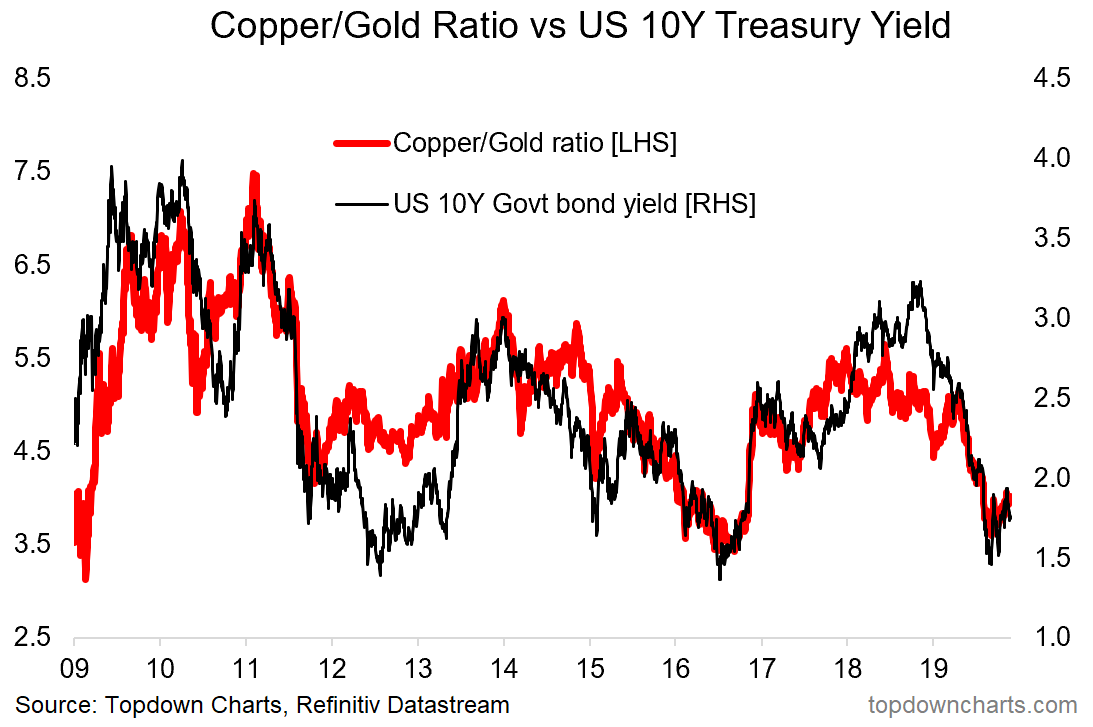 What to watch for: we’ve had the rebound now, and given my core view that global growth rebounds into 2020 I’m happy with a medium term directional view that copper/gold rises.  The risk short-term is that the rebound is a false dawn. I think if they both extend gains to make new highs (and breach some key resistance levels) we can probably call the all clear against a reversion to a new low or a retest of the Aug/Sep low at least for this cycle.

One thing that would suggest we are still in the early stages of the larger move is that speculative futures positioning is still off-side to a further improvement in the macro pulse.  This reflects still sizable shorts in copper and still sizable longs in gold.  Once we get more data (e.g. PMIs) and market (e.g. price breaking higher and inter-markets) confirmation you could see a more rapid unwind of this positioning… in other words, there may well come a break-point where the copper gold ratio moves more sharply like in 2016. 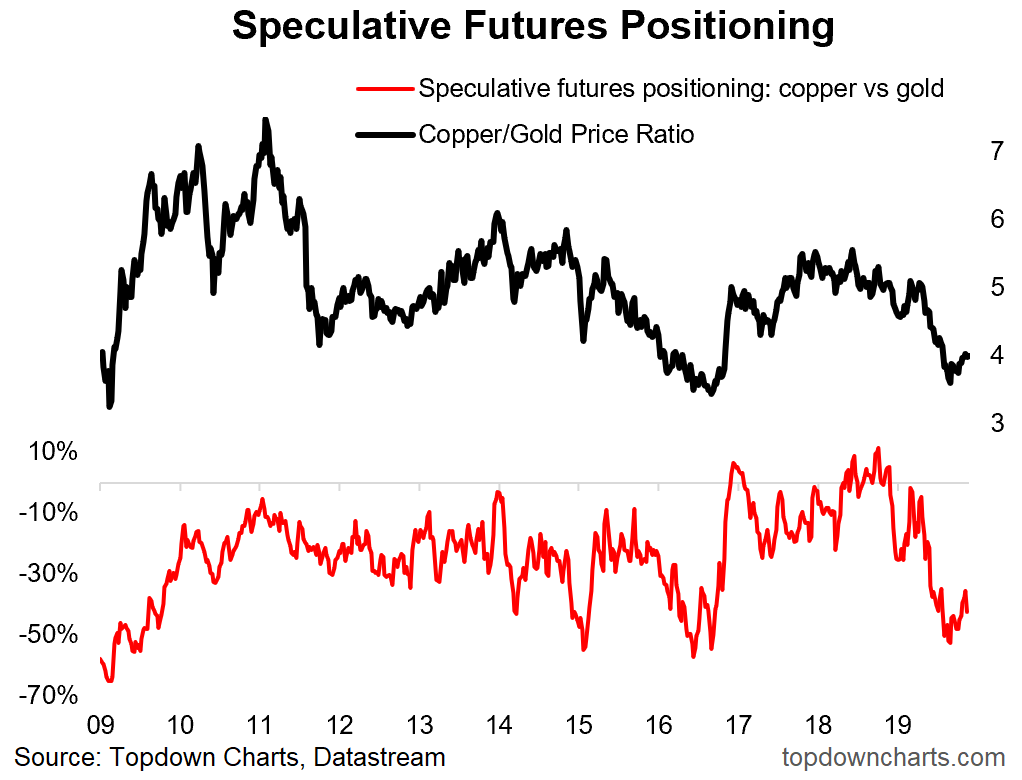 What to watch for: the turn up in relative positioning from extreme lows shows traders are starting to come around to the idea that global growth rebounds in 2020, again, we probably need to see more confirmation before they fully unwind this positioning.

Speaking of confirmation, here’s another pocket of global markets that is in agreement with the directional view.  The relative performance of global consumer discretionaries vs staples (again basically a cyclically sensitive part of the market vs a more defensive part of the market) lines up fairly well with the copper/gold ratio (and FYI, it also lines up very well with the global manufacturing PMI).  Whether or not it’s gotten too far ahead is an open question, but for now I would say it’s another vote for the rebound. 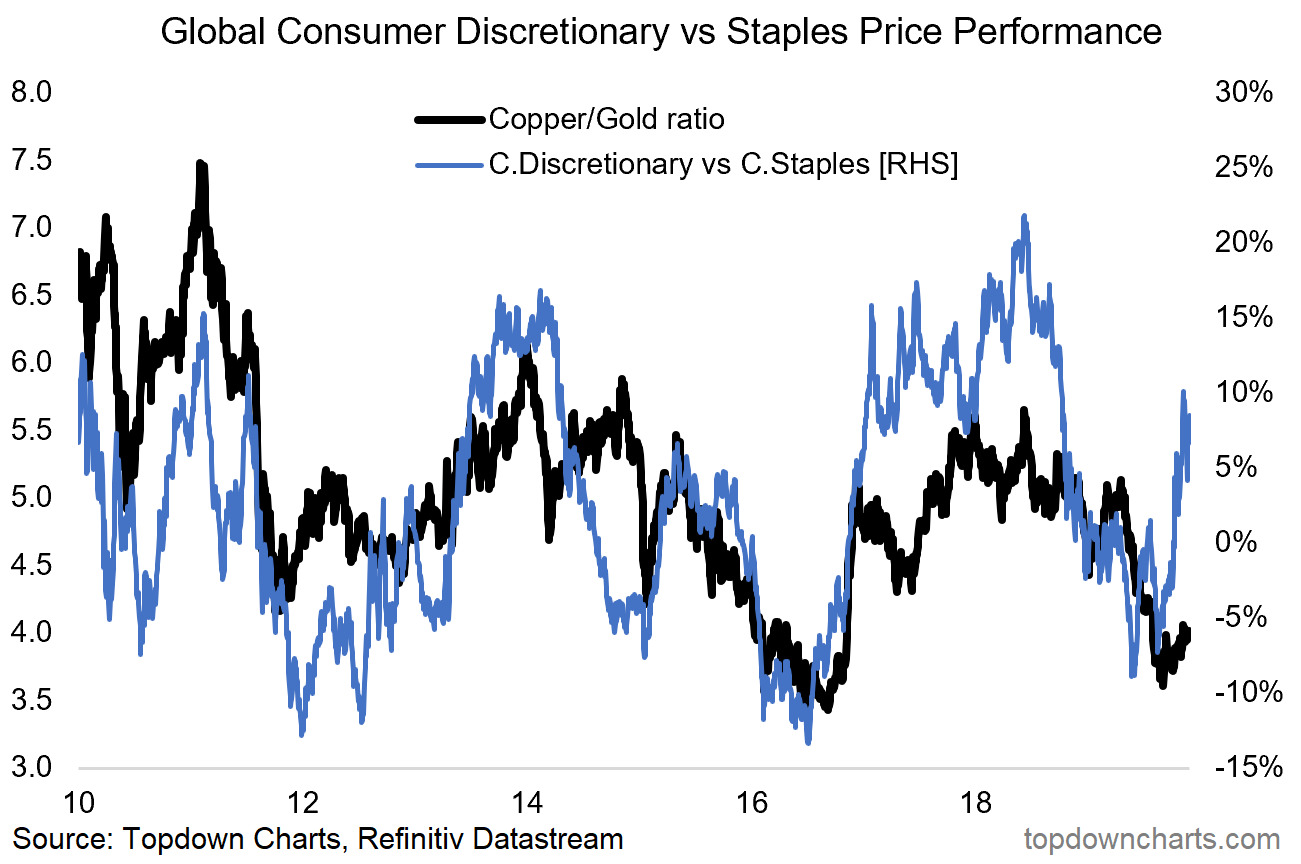 What to watch for: the only thing I would note is that it does give false/early signals from time to time, but when you have multiple signals lining up it certainly makes you pay attention.

Bottom line: the evidence is growing that we've seen a major macro/market inflection point in the path toward my core view that global growth rebounds into 2020.

As for the wider implications (obviously there is a couple of directly related trade ideas that would come out of this), a true turning point in the global growth slowdown will underpin performance for growth assets (i.e. equities and commodities), but could pose risks to defensive assets (e.g. bonds, gold, REITs) – as I outlined in last week's blog post on whether defensive assets have become sources of risk rather than hedges of risk. So this is a key set of charts with major cross asset investment implications.

Article by Callum Thomas, Head of Research at Topdown Charts

When 17 of 20 hedge funds on the HSBC Hedge Weekly performance weekly are managed futures CTAs or quantitative investment funds, a market environmental factor is likely in play.... Read More

If you weren’t planning on seeing Ford v. Ferrari, which came out on November 15, I’d recommend changing your mind. Based on the real-life story of the Ford-Ferrari feud... Read More

Firms on Wall Street are starting to monitor and limit the use of Twitter to make sure that they are not breaking any securities regulations by hyping up a... Read More

The continued interest in macro strategies is evidence that investors are using the industry not just for its increasing prevalence of quantitative strategies, but for expertise on how to... Read More