On the morning of his appointment, President-elect Trump’s selection for U.S. Treasury Secretary, Steven Mnuchin, said that tax reform will be a priority of the incoming administration and that the President-elect was still targeting a 15% corporate tax rate. The U.S. statutory Federal corporate income tax is currently among the highest in the world at 35%, while the effective tax rate was only slightly lower in 2015 at 29%. The prioritization of tax reform, inclusive of corporate tax cuts designed to improve the competitive position of U.S. corporations within the global economy, is potentially . . .

Coffee lovers can expect to pay a little bit more for a cup, now that coffee futures’ meteoric February rise has finally made its way to the grocery store. The... Read More

Part two of our interview with Peter Mantas and Matthew Castel, the General Partners of Logos LP. In this part they talk about their views on portfolio construction, favorite... Read More

North America Up, Europe Down: CITI’s Examination Of Global Oil

The global energy sector is shifting more resources to North America, both to take advantage of shale reserves and to reduce some of the political risk the sector faces... Read More

Warren Buffett has historically tried to make it clear that he does not like airlines. This changed in 2017 when the Oracle of Omaha jumped into airlines stocks. Q2 hedge... Read More

Alcoa Inc (NYTSE:AA) will release its earnings numbers for the three months ending September 30 this afternoon after the bell rings on Wall Street. The company has for many... Read More 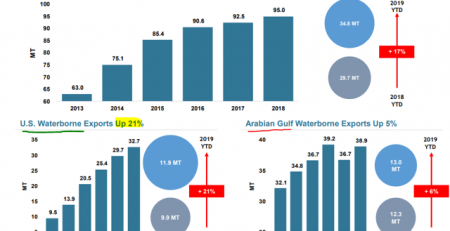 Not So Fast: Fannie Mae, Freddie Mac May Still Be In Conservatorship In 2021

The clock may finally be counting down on the end of conservatorship for the government-sponsored enterprises. However, some analysts are not convinced that Fannie Mae and Freddie Mac will... Read More