Third Point, now likely the largest single shareholder of Sony Corporation (TYO:6758) (NYSE:SNE), has recommended through a letter to management to changing the ownership structure of Sony Entertainment by IPOing a 15-20% stake to unlock hidden value. Sony has so far responded by saying that the business is a core part of Sony. CLSA Asia seems to be the first brokerage firm with a report out on the big news about Dan Loeb's activism versus Sony. They agree that there is value locked within there. CLSA thinks that the proposals and greater understanding of unlocked value will be a strong catalyst for the stock and reiterate our ¥2,400 target. Below are further details from the report.

Dan Loeb suggests a special Sony Entertainment subscription rights offering to current shareholders and Third Point is prepared to backstop the IPO up to US$1.5-2bn, which would give Sony a significant infusion of capital. Sony Corporation (NYSE:SNE) would benefit from this liquidity while maintaining control of the spun-off entity and push down a substantial portion of its debt into the new entity.

Sony Corporation (TYO:6758) (NYSE:SNE) has not fully responded in detail to Dan Loeb’s proposal, and we assume the company is giving the proposal thoughtful consideration given the obvious benefits and maintenance of control. Sony has been focused on leveraging its content to support its hardware business, but Third Point’s proposal could give Sony and its shareholders extra ammunition with a lower cost of debt and greater focus.

We think Third Point’s proposals offer Sony Corporation (TYO:6758) (NYSE:SNE) and its shareholders the best of all possible worlds. Sony can maintain control of its entertainment business and implement content driven strategies, improve its balance sheet, unlock value for shareholders, and increase its focus on the highly competitive rapidly changing electronics business. We also believe it would be positive for Sony to strongly consider further diversifying its board talent and act as a model for other large Japanese technology-company boards competing in the global marketplace. We also agree that Sony’s electronics business is headed for a rerating as key products such as smartphones and TVs grow in share and profitability.

We also agree with Dan Loeb that Sony has a wealth of other underappreciated assets, including stakes in Sony Financial, M3, Olympus, and Japan Display. We also note that Sony also sits on over ¥1.2tn of deferred tax assets that in some part should be useable over the next several years of increased profitability.

Our sum-of-the-parts-derived target price of ¥2,400 equates to 1.1x FY3/15 PB, compared with 1.2x FY3/15 ROE/COE. Our DCF model also indicates a ¥2,400 fair value. Third point suggests that Sony Corporation (NYSE:SNE)’s picture and music (Sony Entertainment) assets are worth 9x EV/Ebitda versus our more modest assumption of roughly 6x. If Third Point’s plan to unlock value were to result in a 9x EV/Ebitda, the sensitivity for our price target would result in approximately a ¥2,900 price target. 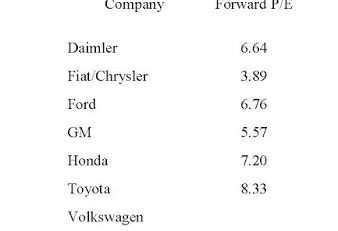 China Could Experience Major Credit Event In The Next 5 Years: Chanos

In their recent episode of the VALUE: After Hours Podcast, Braziel, Hoffstein, and Carlisle discuss how Growth Got Crushed. Here’s an excerpt from the episode: Q1 2021 hedge fund letters,... Read More

Investors are “Fooled by Randomness” and when chasing returns to make investment decisions in funds more often than not do not take into account key considerations that paint a... Read More