Over the last couple of decades, several theories have been coined in, by different researchers, in their bid to explain the notion behind large foreign cash holdings by multinationals. Not until the latest empirical evidence, have researchers  been able to, categorically identify, one absolute relationship between foreign multinationals and excessive cash holding.

There have been theories that have studied tax policies and their impact on cash holding, but still, as Pinkowitz et al indicated in their paper, published in May 2012, tax policies were found to hold no direct relationship between foreign multinationals and large cash holdings. For instance, the writer notes, “In particular, features of the U.S. tax code or of the U.S. regulatory system could not explain these holdings.”

However, when these findings were put on a much wider scale that includes local companies, it could not continue to hold. Furthermore, research conducted by Credit rating company Moody's Corporation (NYSE:MCO), showed that a majority of the cash held overseas by multinationals is within the confines of the technology companies.

In march this year, before the publication of the paper herein referred for this article, we published an article indicating that Apple Inc. (NASDAQ:AAPL) held massive amounts of cash reserves lying in foreign banks, approximately $100 billion. Strikingly, the amount reported, as per the Moody's report, at $74 billion, was more than double as compared to the figure recorded in the year 2010, which was $35 billion.

So what exactly has been pushing these tech firms toward these unimaginable thresholds? If you are guessing that the Global financial crises had a hand in it, then you are probably wrong. It is obvious that the menace tormented the financial industry sector more than any other. So why the tech companies. Steve Jobs believed that people never really know what they would like to have unless they practically held it, I read an article from one of his close followers stating that Jobs believed, “People don't know what they want unless they see it.” This perhaps explains why, arguably, Apple Inc. (NASDAQ:AAPL) leads the charts in terms of innovation.

Innovation is not cheap, investment in research and development (R&D), is its backbone. Consequently, for this to be successful, availability of cash, is of the essence. Pinkowitz et al established that the most essential relationship between the massive cash reserves in overseas, set aside by multinational companies, was R&D. This was basically because, investment in R&D requires having enough cash at your disposal. Elaborately, R&D is ideally a risky business, that has no guarantee for return on investment, this further indicates the need for extra cash on the side. Additionally, picking up an earlier theory as featured here, we noted that firms facing uncertain prospects tend to keep more cash, this is a further justification of the R&D characteristic.

Moody's research report also showed that approximately 83% of all the cash held by tech multinationals in foreign lands, was attributed to the top ten tech companies globally, a majority of which originate from the U.S. Illustratively, Moody’s Investors Service’s Richard Lane, in the report, indicates that Apple holds $74 billion, followed some distance behind by, Microsoft Corporation (NASDAQ:MSFT) with approximately $50 billion. Cisco Systems (NASDAQ:CSCO) was third at $42.3 billion, while Oracle Corporation (NASDAQ:ORCL) was ranked fourth with $25.1 billion, and QualComm (NASDAQ:QCOM) came in fifth with $16.5 billion.

Further statistics obtained from the report, showed that the tech companies held nearly 50% of the overseas cash holdings, with a whopping $227 billion from the global total of $457 billion. Nonetheless, it was Apple, whose statistics continued to romp at alarming rates. The amount held by top ten tech companies grew from 74% to 83% within five years, while total cash held overseas rose by 31%, March quarter, year on year; but bar Apple and that figure would come down to 15%. 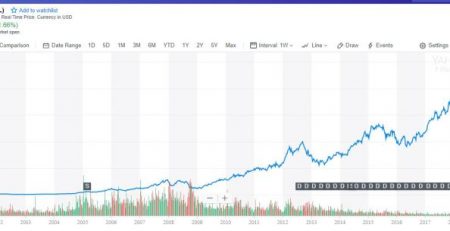 Yesterday Apple announced new iPhone models that will be bigger, will be better, faster, stronger, and—of course—more expensive. Over the summer Apple (AAPL) passed the $1 trillion in market... Read More