By Malcolm Baker And Jeffrey Wurgler

The financial crisis has led to stricter bank capital requirements, both globally via Basel III and in the U.S. through further constraints imposed by the Federal Reserve, and calls for further action. Setting these requirements requires balancing many costs and benefits, both social and private. In this paper, we argue that an important private cost has heretofore been neglected: All else equal, making regulated banks less risky may actually raise their cost of capital—with consequent implications for investment, growth, and the development of a shadow banking sector.

How can this be? Making equity less risky brings an overlooked “low risk anomaly” into play: Within the stock market, historical returns and thus realized costs of equity are higher, not lower, for less risky equity (e.g., Ang, Hodrick, Ying, and Yang 2006; Baker, Bradley, and Wurgler 2011). As any such anomaly is much weaker in the debt markets, Modigliani-Miller capital structure irrelevance fails (even absent other frictions), and banks’ weighted average cost of capital becomes inversely related to leverage.

After background on the low risk anomaly, we use a large sample of US bank returns and capital structure data to illustrate, first, that bank equity risk increases with leverage, and, second, that the anomaly is present for banks. A calibration that puts the two pieces together suggests that a large increase in capital requirements could, via the low risk anomaly, meaningfully increase banks’ cost of capital.

To be sure, when all social and private benefits and costs are weighed, stricter capital requirements may well remain desirable. The argument here is that one cost has been neglected and should be added to the debate.

I. The Low Risk Anomaly

Multiple Nobel Prizes, hundreds of textbooks, thousands of papers, and millions of classroom hours have incorporated the notion that risk is rewarded by expected return. Across asset classes, this holds. In long-term US data, for example, stocks provided higher but more variable returns than long-term corporate bonds, which in turn provided higher but riskier returns than longterm Treasuries, and so on.

The historical risk-return tradeoff within the stock market has been flat or inverted, however. The standard Capital Asset Pricing Model (CAPM) predicts that the expected return on a security is proportional to its systematic risk (beta). The low risk anomaly is the pattern that stocks with lower beta, or even idiosyncratic risk, have earned higher returns. This anomaly appears whether returns are risk-adjusted or, in some cases, even if they are not. It appears not just in the US but also in each G7 country and across 23 developed markets (Ang et al. 2009, Baker et al. 2014).

This paper and several others consider the possibility that the failure of the CAPM reflects inefficient asset pricing, not model misspecification of risk. Some investors may have an overconfidence- or lottery-based preference for volatile or skewed investments (Cornell 2008; Kumar 2009; Bali, Cakici, and Whitelaw 2011; Barberis and Huang 2008). Leverage-constrained investors seeking high returns from beta risk may also want high beta stocks (Frazzini and Pedersen 2014).

If “arbitrageurs” cannot meet such demand, overpricing of high beta stocks will result, the observable implication of which is abnormally low future returns on high beta stocks. For firms, this means a low cost of equity relative to that of less risky, low beta issues.

For a variety of reasons, such arbitrage is indeed likely to be limited. The most plausible “arbitrageurs” in practice, professional fund managers, may prefer high beta stocks
themselves because the inflows to performing well in rising markets exceed the outflows to performing poorly in falling markets (Karceski 2002). In addition, fund manager performance is often defined as return relative to “the market” on a non-beta-adjusted basis. This leads managers to avoid low beta stocks (Baker et al. 2011). More generally, the extra costs of shorting inhibit any effort to exploit overpricing (Hong and Sraer 2014).

Things were looking pretty bleak back in March for bond exchange-traded funds. The Covid-19 selloff created a liquidity crunch that drove their prices to trade at deep discounts to... Read More 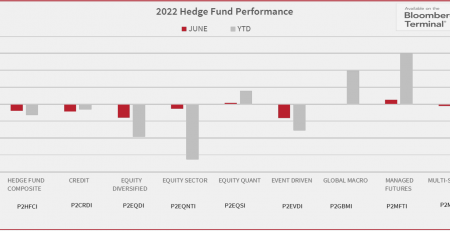 PivotalPath has released their monthly report, the Pivotal Point Of View, which measures performance among more than 2,500 institutionally-relevant hedge funds, as well as 40+ different hedge fund strategies... Read More

An article by Mary Schlangenstein and Katherine Burton of Bloomberg regarding Bill Ackman's Pershing Square Capital Management and a letter to raise money for a single stock fund and was... Read More

Sandon Capital presentation on Tatts Group Limited (TTS). Tatts Group is an A$5.6bn diversified gambling conglomerate with an operational footprint in every state and territory of Australia and into... Read More

PM Bill Hench on the current state of tech and how his outlook on semiconductors differs from the Wall Street consensus. Q3 hedge fund letters, conference, scoops etc If you’re looking... Read More