Consensus expectations for calendar year 2016 S&P 500 earnings are finally beginning to show improvement, but should investors be skeptical? Over the past month analysts have increased aggregate S&P 500 earnings expectations by nearly 50 basis points (bps), raising 2016 expected earnings growth to 0.4% today from the slightly negative growth seen at the start of May. Based on our analysis, the driving factor of the movement is unclear and may even just be typical behavior for the index.

A mix of positive and negative factors has influenced earnings expectations over the past month. Housing related data has generally been a bright spot, consumer spending habits and sentiment have remained firm, and a recent report on industrial production was encouraging. Oil prices have been on the rise, and the decline in the dollar has provided some relief from earlier disappointments. However, consumer confidence has stopped improving and has even backtracked by some measures in recent months, and the last two employment reports were downright disappointing, although wage growth remains a silver lining. Turning to corporate earnings, first quarter S&P 500 results ended up being better than expected, but the 5.4% decline in profitability was the third consecutive quarter of decline, and the beat rate of nearly 260 bps was well below the historical average of 400- 450 bps. Furthermore, forward earnings guidance from corporate management was mostly downbeat relative to prior existing estimates.

Yet, consensus expectations for second, third and fourth quarter S&P 500 earnings have all improved since May 1. The third and fourth quarters have seen the largest increases of 35 bps and 50 bps, respectively. While these may not be large gains from a historical perspective, this is the first sustained reversal in the trend of deteriorating calendar year 2016 expected earnings seen since the start of this year.

The prospect of a rebound in second half earnings would mean that the trough in earnings was recorded in the first quarter. This would be encouraging since a bottom for quarterly earnings was previously supposed to occur in each of the last three quarters, but was then pushed out yet another quarter after each season provided reduced guidance relative to earlier expectations. The anticipated second quarter 2016 decline of 4.6% is an improvement over the 5.4% decline in first quarter results, and should mark the final quarter of negative earnings growth. The last time that the S&P 500 index reported four consecutive quarters of declining growth was in 2009. Combined, these developments provide a glimmer of hope that we may now have finally turned the corner with regards to the corporate earnings growth momentum.

Reviewing earnings trends dating back to 2012, full-year earnings estimates tend to bottom at or around the start of May, then increase for a few additional weeks, and then return to a downward trajectory heading into the start of third quarter earnings season at mid-July. The trend for the remainder of the year has been to the downside with growth expectations for the current year on December 31 typically lower than where it bottomed earlier in May (remember that fourth quarter results are not reported until January/February). This suggests that the recent improvement in S&P 500 calendar year earnings-per-share could be temporary in nature.

While we still believe the second half of 2016 will provide positive earnings growth results, it may not be enough to significantly improve the overall market outlook for full-year 2016 prospective earnings.

Longer-term changes and developments in earnings growth expectations are displayed in Table 2. During periods of extreme economic stress, as experienced in 2008 and 2009, earnings estimates can move erratically. Even in the period following the years of the Great Recession, earnings growth has been difficult to predict given the subpar economic growth experienced. This has led to reductions in earnings over each quarter except one since 2012.

Jim Chanos Compares Musk To Skilling Who is the Smartest CEO in the World? James Chanos, Kyle Bass and Bethany McLean discuss the difference between being smart, being clever and which... Read More

Rafferty Capital Markets analyst Richard X. Bove pens a love letter to big banking, laying out the reasons why Americans should - and do - trust the Big 4. Actions... Read More 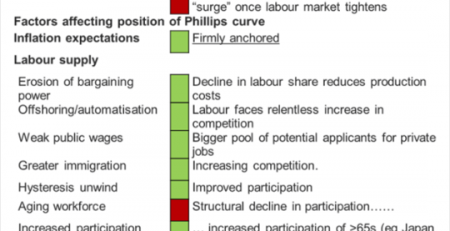 The hedge fund industry has produced its ninth consecutive month of aggregate gains in July, and the difference between average gains and average losses was relatively narrow during the... Read More