Eastman Kodak Company (OTCMKTS:EKDKQ) agreed to sell the camera-film business that made it a household name and other business to U.K. retirees in exchange for payment of a pension debt worth $2.8 billion. The transaction has to be approved by the U.S. bankruptcy court. The terms of the deal outline that Kodak will pass on its “personalized imaging … (and) document imaging” businesses to the U.K. Kodak Pension Plan, its largest creditor, according to the Wall Street Journal. The pensioners then have the choice to run the businesses or sell them as they see fit. Eastman Kodak Company (OTCMKTS:EKDKQ) will also receive $650 million in cash and other value as part of the deal. Some of these funds will be used to support Kodak’s reemergence from bankruptcy protection and to fund expansion of its commercial imaging businesses. One of the requirements of the lenders to provide financing was for Kodak to sell its personalized and document imaging businesses for more than $600 million.

Eastman Kodak Company (OTCMKTS:EKDKQ) filed for bankruptcy protection under chapter 11 in January 2012. For the court to approve of Kodak’s exit of bankruptcy court, the sale of businesses and the $2.8 billion liability needed to get resolved. Kodak already has a tentative deal to sell the document imaging business to Brother Industries Limited reached on April 15. The bankruptcy judge has yet to approve the deal and Kodak can abandon the deal in favor of a “bundled” business sales transaction, people familiar with the matter say.

Eastman Kodak Company (OTCMKTS:EKDKQ) is scheduled to present a plan for its post bankruptcy business on April 30, outlining what businesses will be emphasized and how much creditors are expected to receive. Kodak will be positioned as a commercial provider of printing equipment. The company will continue to operate outside of the United States.

Separately on April 29, Eastman Kodak Company (OTCMKTS:EKDKQ) reported a quarterly profit of $283 million or $1.04/share; compared with a loss of $365 million or $1.35/share a year earlier. The profit was mostly due to the $535 million gain recorded on the sale of the digital imaging patent portfolio, partially offset by a $77 million noncash goodwill impairment charge related to the patent sale. Revenue shank 8.5 percent from a year earlier to $849 million, the Wall Street Journal reported.

The company's pink sheet shares rose 25 percent on Monday to 37.9 cents. The company has said it does not expect shareholders to receive anything in the bankruptcy. Most companies that file for Chapter 11 bankruptcy end up canceling their stock. Lazard Ltd (NYSE:LAZ) is advising Eastman Kodak on its debt restructuring. 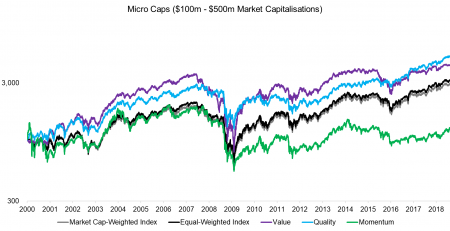 Much has been said lately regarding the consolidation wave in the European telecom industry. It was theorized that robust M&A activity will be able to revitalize the weak growth... Read More

Ben Graham Was a Quant: Raising the IQ of the Intelligent Investor