Hedge funds were up 0.50%1 during the month of September, outperforming underlying markets as represented by the MSCI AC World Index (Local) which gained 0.19% over the same period. Close to 63% of underlying constituent funds for the Eurekahedge Hedge Fund Index were in positive territory this month, with majority of them being long/short equity mandated. Japan hedge funds led performance among regional mandates this month, up 1.35% while distressed debt managers topped the table across strategies, gaining 1.07% over the same period.

We’ve long argued (and proven empirically) that there is a strong correlation between improving ROIC and increasing shareholder value. Nevertheless, the majority of mutual funds managers continue to pick... Read More 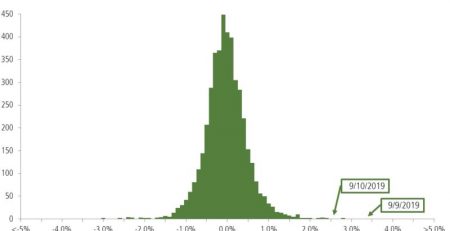 Value: Don’t Call It A Comeback, It’s Been Here For Years

Aside from the weekly S&P500 #ChartStorm, a regular practice of mine is to survey my followers on Twitter to ask them whether they are bullish or bearish for primarily fundamental... Read More

Even though US oil services EPS estimates are down sharply, Citi's price targets are slightly up Read More