Net Free Credits from the NYSE Margin Debt data shown in the chart above is essentially a measure of cash levels in margin accounts. Current levels have fallen to levels that have generated a tactical sell signal based on a 2-standerd deviation Z-Score reading. The last time a sell signal was generated was on April 2010 and the S&P 500 (S&P Indices: .INX) subsequently corrected by 16% in two months. Net free credits for January were at a negative $77.2 million or cash balances are negative and the Z-Score indicates the cash draw down has been excessive. So a contrarian sell signal is given.

Leverage, as measured by NYSE Margin Debt, rose 31.6% year-on-year (YOY) and 10.2% month-over-month (MOM) to $364bn in January, compared to the July 2007 peak of $381bn. Leverage can be used as a sentiment indicator because it is related to investor confidence. It tends to be correlated to the direction of the equity market – investors are likely to gain confidence and add leverage when the equity market is going up and vice versa.

Current readings indicate that investors are becoming more confident in the equity market, which generally supports further upside. Just short term levels have gotten a bit ahead of themselves with cash levels now drawn down to levels which typically result in market correction.

BAML models indicate that Market Neutral funds bought market exposure to 1% net long from 4% net short. Equity Long/Short held market exposure steady at 33% net long, just below the 35-40% benchmark. Macros aggressively bought the S&P 500 (/INX), NASDAQ-100 (INDEXNASDAQ:NDX) & 10-year Treasuries, sold commodities, and added to their
shorts in USD. In addition, they added to their shorts in both EM and EAFE. 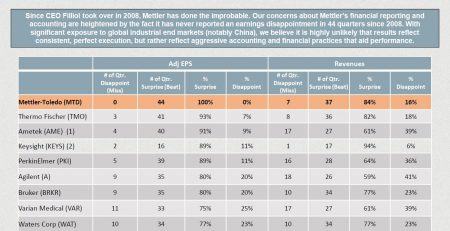 In a hedge fund letter from December 2013, Waterstone Capital, who suffered through a -20% year to date reversal last year, stated that while the hedge fund’s performance over... Read More