Future business activity will reflect two economic realities: 1) the over-indebted state of the U.S. economy and the world; and 2) the inability of the Federal Reserve to initiate policies to promote growth in this environment.

The first reality has been widely acknowledged, as developed and developing countries both have debt-to-GDP ratios sufficiently large to argue for a slowing growth outlook (Chart 1).

U.S. government debt now stands at 103% of GDP. If private debt is included, the ratio climbs to about 370% of GDP. Scholarly studies indicate that real per capita GDP growth should slow by about one-quarter to one-third from the long-run trend when the total debt-to-GDP ratio rises into the range between 250% and 275%. Since surpassing this level in the late 1990s, real per capita GDP has grown just 1% per annum, much less than the 1.9% pace from 1790 to 1999.

These results indicate that the relationship between debt and economic growth is non-linear, or progressively negative, as debt advances to higher levels, a pattern confirmed by academic research (Chart 2). The latest information further supports this relationship. The current expansion began in 2009, and since then real per capita GDP growth has been 1.3%, less than half the 2.7% average growth in all expansions from 1790 to 1999.

The Bank of International Settlements released a report last month stating that total public and private debt relative to GDP for the entire global economy stands at 265%, up from 219% at the peak of the prior credit cycle. Additionally, the global rate of growth is decelerating significantly while debt levels are continuing to rise, indicating an increasing debt drag. Researcher Chris Martenson calculated that since 2008 total public and private debt rose by $60 trillion while GDP gained only $12 trillion.

The second economic reality is the failure of the Federal Reserve to produce economic progress despite years of wide-ranging efforts. The Fed’s zero interest rate policy (ZIRP) and quantitative easing (QE) have been ineffectual, if not a net negative, for the economy’s growth path.

Short-term interest rates in the U.S. have fallen to near zero, restraining the central bank’s ability to lower them further. None of the more powerful channels of monetary policy, including money growth, have been responsive to Fed actions. When the debt overhang is excessive, the Fed and other central banks cannot control money and velocity, real long-term interest rates or the Wicksell Effect. Over the summer, the Wicksell effect has become more adversarial to economic growth in the U.S. as nominal GDP growth has slowed, while the market rate of interest, as measured by the BAA corporate bond yield, has risen. Treasury bond yields, in real terms, have remained stubbornly unchanged since 1990 even though the nominal bond yield has dropped 600 basis points.

Despite the unprecedented increase in the Federal Reserve’s balance sheet, growth in M2 over the first nine months of this year fell below its average rate of growth over the past 115 years, a time when the growth in the monetary base was stable and quite modest (Chart 3). In addition, velocity of money, which is an equal partner to money in determining nominal GDP, has moved even further outside the Fed’s control. The drop in velocity to a six decade low is consistent with a misallocation of capital and an increase in debt used for either unproductive or counterproductive purposes.

The Fed, of course, has the authority to buy certain assets, including government bonds, in the open market, but that is where their authority starts and stops. They create excess reserves by buying securities in the open market, which are then owned by the depository institutions. However, the Fed does not have the direct capability to move these funds and therefore place them in the hands of households, businesses, and other nonbank sectors. It is this transaction that creates money. Keeping short-term interest rates low for an extended period of time will not change the trajectory of the economic growth path as long as the massive debt overhang persists.

Finally, policy actions have worked at cross-purposes. The current zero interest rate policy has rendered mass distortions in the allocation of capital and mispricing of risk assets. Such repressed interest rates have contributed to more excess capacity that, in turn, has reduced inflation. The ZIRP policy allows low quality borrowers access to debt markets, creating untenable balance sheet exposure when economic activity slows. In the meantime, such actions undoubtedly contributed to the slumping velocity, which means that even if the Fed could have printed money, any impact on the economy would still have been thwarted.

The evidence is clear that ZIRP and QE have been ineffective and a net negative for economic growth. The Fed appears to have few new policy tools. However, new proposals now make it seem like the Fed could provide a quick solution should a slowdown or recession eventuate.

The problems facing the economy are structural, and cyclical factors are now beginning to interact with longer run forces to create an increasingly delicate economic outlook. If enacted, these new proposals, or “quick fixes”, could over time create a set of unintended consequences that might easily produce serious damage to the economy, more than outweighing any short-term gains.

These “quick fixes” include: 1) an implementation of negative overnight and other short-term interest rates; 2) an additional round of QE; 3) a program proponents call monetization of government debt that is really just another round of QE; and 4) a plan to have the Fed print money by directly funding federal tax cuts or spending plans, commonly referred to as a “helicopter drop”. The Fed has authority to implement the first two proposals. Option three has already been tried and has failed. Option four would require massive law changes. 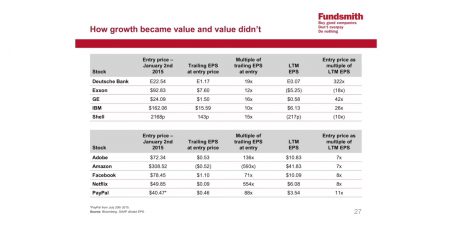 Terry Smith: Even If You Had Perfect Foresight You Could Not Predict The Market’s Reaction

In his recent Fundsmith Annual Shareholders’ Meeting, Terry Smith discussed market timing, and even if you had perfect foresight it would still be impossible to predict how the market... Read More

Yacktman on the Sources of Moats, Concern with Apple's Strategy

Don Yacktman on the sources of moats, his concern with Apple Inc. (NASDAQ:AAPL)'s strategy. Read More

The Case For And Against Activist Hedge Funds

The Case For And Against Activist Hedge Funds by igopp Activist hedge funds can count on a number of supporters in academia and in the media rising up in defense... Read More