The Federal Reserve’s interest rate lift-off in December did little to disturb the uneasy calm that had reigned in financial markets in late 2015. But the new year had a turbulent start, featuring one of the worst stock market sell-offs since the financial crisis of 2008.

In a second phase, the deteriorating global backdrop and central bank actions nurtured market expectations of further reductions in interest rates and fuelled concerns over bank profitability. In late January, the Bank of Japan (BoJ) surprised markets with the introduction of negative interest rates, after the ECB had announced a possible review of its monetary policy stance and the Federal Reserve issued stress test guidance allowing for negative interest rates. On the back of poor bank earnings results, banks’ equity prices fell well below the broader market, especially in Japan and the euro area. Credit spreads widened to a point where markets fretted about a first-time cancellation of coupon payments on contingent convertible bonds (CoCos) at major global banks.

Underlying some of the turbulence was market participants’ growing concern over the dwindling options for policy support in the face of the weakening growth outlook. With fiscal space tight and structural policies largely dormant, central bank measures were seen to be approaching their limits.

On 16 December, the Federal Reserve raised the target range for the interest rates, after eight years of monetary policy easing across the major currency areas. Even after the increase, the US monetary policy stance remained highly accommodative: the increase in the federal funds target range was minimal – 25 basis points – and the stock of assets acquired over years of large-scale asset purchases was left unchanged. In real terms, the US policy rate had been negative since 2008 (Graph 1, left-hand panel). The Federal Open Market Committee (FOMC) signalled that the shortfall of inflation below its 2% objective, and uncertainty surrounding economic conditions more broadly, were expected to warrant only gradual increases in the federal funds rate. Nonetheless, the decision marked a turning point in an era of extraordinary monetary accommodation.

When the first US rate hike eventually came, it hardly caused a stir. The onset of the tightening cycle had long been expected, starting as early as May 2013, when expectations of an eventual “tapering” of asset purchases had reverberated through global financial markets. In the days before 16 December 2015, the futures-implied probability of a December lift-off was near 80%, reflecting confidence in the US economic outlook (Graph 1, red line in right-hand panel).1 Apart from temporary volatility around the announcement date, the yield curve barely moved. Equity markets traded sideways, as one source of uncertainty was resolved. However, other sources of uncertainty soon appeared, and have come to dominate the scene.

Turbulence spreads from EMEs to AEs

The deterioration of global growth prospects unsettled financial markets from the start of the year.

The first phase of turbulence centred on anxiety over global growth in EMEs, and China in particular. China’s reported growth slowed to 6.9% in 2015, the lowest official rate since 1990. Consensus forecasts for 2016 had been falling continuously over the previous 12 months (Graph 2, left-hand panel). The softness in manufacturing had long been offset by a growing service sector, but in December the services PMI stood at its weakest level in 17 months. Concerns about a slowdown in Chinese manufacturing spread to other EMEs, for which 2016 growth forecasts had been falling rapidly in the second half of 2015 (Graph 2, left-hand panel). Worries about manufacturing were not limited to Asia: the strength of the US dollar and low oil prices cast a pall over the outlook for US manufacturing, which weakened relative to the non-manufacturing sector (centre panel). Indeed, the growth outlook for all major economic regions continued to deteriorate (right-hand panel).

Against this backdrop, disappointing news from China triggered market turbulence on the very first trading day of the year. As a closely watched manufacturing index pointed to renewed sectoral weakness, stock markets sold off in both advanced and emerging economies (Graph 3, left-hand panel). As the Shanghai Composite plunged over 15% in the first two weeks of the year, major AE stock markets dropped by almost 10%. During the first week alone, trading in China was halted twice in response to new market mechanisms that stop trading when losses reach a certain threshold, adding to market distress. Implied volatilities soared to peaks comparable to those observed in August 2015, and well above the subdued levels of the previous three years (Graph 3, right-hand panel). But in contrast to that short-lived episode, the rout in early 2016 lasted for several weeks.

Growing concern about the global economic outlook, in turn, led to further losses in commodity markets. The prospect of weaker demand, on top of the supply glut that had become apparent over the past 18 months, hit crude oil markets hard. Oil prices extended the slide of the second half of 2015, falling below $30 per barrel for several days before rebounding to slightly above that level (Graph 4, left-hand panel). Brent settled 70% below the average nominal price observed between mid- 2010 and mid-2014, the peak of the long boom in commodity prices which spanned over a decade. In fact, current oil prices barely exceed the average nominal price levels of the five years preceding 2002, right before the onset of the commodity price boom. Base metals and foodstuffs showed more resilience, not least because the respective indices had already dropped substantially prior to the recent turbulence. Their nominal prices remained well above pre-peak levels.

The heavy debt burden of producers (especially US shale companies) may have exacerbated the price decline.2 Lower oil prices reduce the cash flows from current production and raise the risk of illiquidity and possibly debt defaults. Firms facing such strains may have maintained or even raised production to preserve liquidity and reduce debt, thereby contributing to further price declines. These forces may have been at play in the US market, where the large drop in oil prices went hand in hand with continuous increases in oil inventories (Graph 4, centre panel).

In the midst of a global risk asset sell-off, a general flight to safety strengthened the US dollar. Currencies of EMEs and commodity exporters tested new lows before finding support in mid-January at levels about 3% below year-end (Graph 4, righthand panel). Concerns about renminbi depreciation also stirred foreign exchange market volatility. On 11 December 2015, the People’s Bank of China introduced the China Foreign Exchange Trade System (CFETS) reference basket, signalling a shift from a singular focus on the US dollar. Between August 2015 and late January 2016, the renminbi depreciated by 6% against the US dollar, while staying broadly stable vis-à-vis the CFETS basket. The country’s foreign exchange reserves dropped by more than $300 billion over the same period, at a seemingly accelerating pace that unnerved investors. Expectations of further depreciation may have contributed to the sell-off in the domestic stock market, which in turn put further pressure on the currency. The combined impact of lower oil prices and a stronger US dollar has put substantial pressure on many EMEs at a time when the tide of global dollar liquidity appears to be turning.

Global credit markets were also riled by turbulence. The low interest rates environment of the past few years had gone hand in hand with a search for yield that eased credit conditions, in particular for riskier borrowers. As market turbulence spread, AE high-yield credit came under unusual pressure, after having been buffeted by increasing headwinds since mid-2014 (Graph 5, left-hand panel). The widening of spreads was particularly sharp for US high-yield debt, which was weighed down by the underperformance of energy companies and fears of a rise in default rates (see Box 1). Since mid-2014, the US high-yield spread more than doubled, reaching levels comparable to the peaks observed during the European debt crisis in 2011. By comparison, the widening of corporate spreads was more moderate in Europe, with high-yield spreads halfway to their 2011 peaks. The divergence between the investment grade spreads across the two regions coincided with the onset of the oil price plunge in mid-2014, possibly reflecting concerns over contagion from the oil sector to other parts of the US economy (Graph 5, centre panel). Sovereign credit spreads in EMEs also widened during the initial weeks of 2016, comfortably surpassing the heights recorded in 2011 (right-hand panel).

The monetary policy landscape across EMEs varied, reflecting the role played by commodities, exchange rates and other drivers of inflation. Central banks in emerging Asia and Europe, whose economies mostly benefited from the commodity price plunge, kept their monetary policies unchanged despite substantial currency depreciation. Commodity exporters, by contrast, tightened or signalled an inclination to tighten interest rates, as currency depreciation triggered strong inflationary pressures in spite of slowing economic activity. For most countries, however, the challenging global backdrop for exchange rates left limited space for monetary stimulus.

Always a good read - Euclidean 2Q17 Letter to investors can be found below. Euclidean uses machine learning to find persistent relationships between company fundamentals and investment outcomes. Through this... Read More

The recent move in LIBOR seems to have caught Wall Street off guard. At a time when many analysts and economists are predicting that central banks around the world... Read More 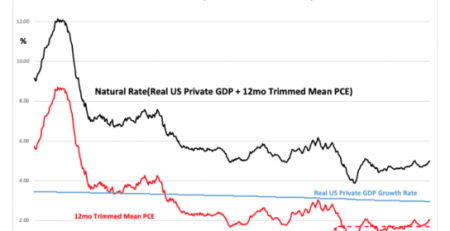 S&P Intrinsic Value Index… We Are Nowhere Near “Bubble” Territory

Been seeing this “bubble” junk being tossed around again recently. I’m guessing it probably more for page views than people honestly thinking we are in a bubble. So, I... Read More

Illiquid Credit: Playing The Role Of A (Good) Bank

Illiquid Credit: Playing The Role Of A (Good) Bank by Gregg Disdale and Chris Redmond, Tower Watson At a Glance Institutional investors are increasingly exploiting the illiquid credit space vacated by... Read More