JPMorgan: How Did The Company Loss $2 Billion? – ValueWalk Premium

Is JPMorgan Chase & Co. (NYSE:JPM) too big to fail? Not quite so; a surprise announcement reveals that the big wig is barely breaking even since the outset of April. It is in fact submerged in losses as it recorded a loss of about $2 billion. Losing $2 billion in a span of less than two months has come as a shock to most shareholders and prospective investors.

Expectations are dim and net losses are expected to surpass $800 million. The condemnable condition could aggravate depending on market forces and bank actions.

The huge loss supposedly stems from an alleged corporate unit that was initiating trades that were purposely inclined towards cushioning risks. The disgruntled CEO, Jamie Dimon, was insistent that the unit was expected to post a net gain of $200 million- it is surprising that the unit has now posted losses 10 times the expected profits.

When probed on the matter, Dimon openly agreed to sloppiness, errors and bad management. The mistake had a negative impact on JPMorgan’s stock as it dipped a staggering 9% early last Friday.

Renowned Financial analyst in the banking sector, Mike Mayo also had his share of questions. The CLSA investment firm analyst asked whether the losses were attributed to poor management or untamable market forces. An evidently frustrated Dimon went on to repeat that it was an internal error caused by poor strategy and bad execution.

Interestingly, most of the prominent players in the banking sector seem to have taken a dip. Nonetheless, JPMorgan Chase & Co. (NYSE:JPM) leads from behind. Wells Fargo Company (NYSE:WFC), Goldman Sachs Group, Inc. (NYSE:GS), Morgan Stanley (NYSE:MS) and Bank of America Corp (NYSE:BAC) all recorded an estimated 2% drop as of Friday last week. This overall dip came at the wake of the surprise announcement that broke the hearts of JPMorgan Chase & Co. (NYSE:JPM) shareholders.

Another analyst was more candid on his questioning. He went on to inquire whether the terrible timing was in line with the Volcker rule. This rule, also known as proprietary strategy, is motivated towards banning risky investments that exclusively aid in widening profit margins. The Volcker rule is an essential part of the larger Wall Street reform law. The rule came after the infamous financial crisis that stroke Wall Street in 2008.

Dimon responded to the probes by openly exclaiming that JPMorgan did not in any way violate the rule. The CEO also tried to cushion the current deplorable state of affairs by using the bank’s credible track record. Last quarter, the bank did glean $5.4 billion. This income was nested on solid revenues of $27 billion.

BoA Fund Outflows Surge After Brexit News has hit the wires today that the UK’s three largest property funds have halted redemptions as concerns grow about the impact a sudden... Read More

The derivatives problems that led to the 2008 crash and resulting "great recession" are still in play today, as an omni potent force controls In 2008 Standard & Poors (S&P)... Read More

BAML is out with their latest hedge fund monitor. Last week we noted that hedge fund exposure to NASDAQ 100 was near a record high. This week, BAML's highlight... Read More 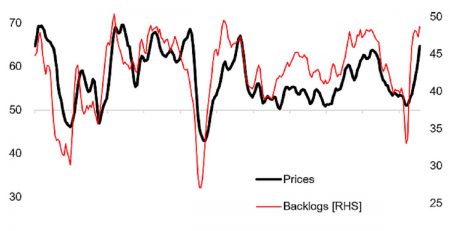 Regular readers might recall back at the start of the year I published my 10 Charts to Watch for 2021. The number 2 chart showed the global backlogs indicator,... Read More