At Last, An End In Sight To The PE-Backed IPO Drought – ValueWalk Premium

At Last, An End In Sight To The PE-backed IPO Drought by Kevin Dowd, PitchBook

In the world of markets and money, few things have stood out during the first five months of the year like the dearth of IPOs. While the absence of venture-backed tech IPOs has been the source of most industry consternation, in truth the drought has extended to IPOs of all stripes.

Until last week, 2016 had seen just five PE-backed public offerings in the U.S., according to the PitchBook Platform. But with a flurry of three last Thursday—including the billion-dollar listing of US Foods—there may finally be light at the end of the tunnel.

Backed by Clayton, Dubilier & Rice and KKR, US Foods (NYSE: USFD) is one of two major foodservice businesses in the U.S., along with Sysco (NYSE: SYY). The company priced its IPO at $23, on the upper half of its expected range, and has so far been well received by public investors. The company opened trading last week at $24.25, and at end of day Tuesday, its stock was up to $24.99, a 3% climb since open and a 9% increase from its listed IPO price.

Its early success as a public company is not an outlier. Whether it’s a sign that the market is friendlier than most think or that the few companies that have IPO’d are particularly healthy, the vast majority of PE-backed businesses to hit the U.S. markets this year have performed well.

Until US Foods debuted, the most lucrative PE-backed IPO in the U.S. this year was held by Red Rock Resorts (NASDAQ: RRR), which raised $531 million near the end of April. The company’s stock opened at $18.50 and has since climbed to $20.39, a 10% increase.

The other two PE-backed companies that went public last Thursday, Cotiviti (NYSE: COTV) and GMS (NYSE: GMS), have hovered right around their respective IPO share prices during their first days on the markets, with Cotiviti falling 6% and GMS climbing 1.4%.

Making up for lost time

Despite all those promising results, we’re still tracking for the lowest number of PE-backed public offerings in the U.S. since 2008.

Numbers have started to rebound this quarter, but that will have to continue—and then some—to match the full-year totals from 2015 (41) and 2014 (78). Yet with an increasing amount of companies waiting in the IPO pipeline and the calendar just flipping to June, there’s of course lots of time for the trend to turn.

The 1Q slump will be hard to offset in terms of yearly numbers, but there’s plenty of reason right now to believe the PE-backed IPO market will return to a healthier state during the back half of the year. 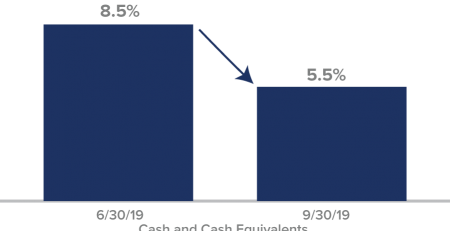 PM Bill Hench details where he is finding opportunities for our Deep Value Approach and how volatility has affected his portfolios’ weightings. Q3 2019 hedge fund letters, conferences and more How... Read More

I recently provided a baker’s dozen list of my favorite books on behavioral finance. Having just finished reading Daniel Crosby’s The Behavioral Investor (available from the Amazon link on... Read More

Size Matters, if You Control Your Junk