The rally in junk bonds has proven to be a life saver to big leveraged buyout groups as companies are able to get access to funding as investors look to invest in companies with high yields.  Companies such as Energy Future Holdings, Realogy and Caesars Entertainment, who are all controlled by private equity groups, all issued junk bonds recently to help gain funding to clean up their pitiful balance sheets.

This junk bond boom has come after the Federal Reserve announced that a low interest rate policy will prevail into 2014 and as Europe starts to show signs of clean its act and in the beginning stages of cleaning its heavy burden debt loads.  Investors see this as an opportunity to take on more risky assets with the hopes of a higher profit.

The money flow into junk bond funds has skyrocketed in 2012, giving portfolio managers more assets to make deals and money with.  This phenomenon hasn’t just taken hold in the US but rather in Europe as well.  Europe’s market for low quality debt has finally begun picking up after struggling and nearly shutting down last year.

As you would imagine, since the “walking dead” are able to get funding again and clean up their balance sheets, LBOs are on the prowl to snatch up companies and get a little breathing room.  Last week, I wrote an article on private equity’s recent fall as three top PE companies all reported horrible losses on the lack of opportunities in the market.  Well, this trend may be changing as a big opportunity is finally presenting itself while bearing the chance to bag huge profits.  LBOs are a huge important source of revenue and profit for some private equity groups.

To use as an example, Realogy, a real estate company controlled by Apollo Group, was able to refinance its debt that was to be paid off next year, was pushed back to 2020 as the company was able to issue bonds to cover their debt obligations.

The junk bond rally of 2008 seems to finally be back in force.  Now companies have a source of funding that can cover day to day operations and ugly balance sheets.  On top of that private equity may be heading back into a golden era as LBOs are once again an option and an opportunity as a revenue source.  However, if we are not careful, this could lead to a bubble worry.  Keep a weathered eye on the horizon for any bubble worries but reap the benefits while you can as well.

Infographic: Long Competitive Advantages (Economic Moats) via autorizadored.es Click to enlarge Get The Timeless Reading eBook in PDF Get the entire 10-part series on Timeless Reading in PDF. Save it to your desktop,... Read More

While Lululemon Athletica inc. (NASDAQ:LULU) just reported 1Q results, the numbers almost don't matter. The company announced that CEO Christine Day, is stepping down from her role. The Board has... Read More

Howard Marks on Specialists vs. Generalists

We previously posted chapter 5 of Bill Gates and Warren Buffett's favorite book, the book is out of print and selling for $1500 on Amazon (slightly cheaper than Margin of Safety). Thanks so... Read More 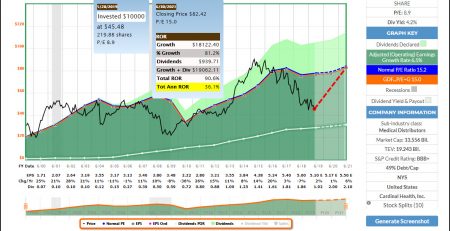 The markets have become very sophisticated since the invention of the internet, with investors from different parts of the world able to access credit from almost any bank or... Read More