LightSquared, one of the first companies to offer mobile satellite services in North America, sought protection under Chapter 11 in May 2012 in order to, among other things, give it time to extend the maturity of a $320 million secured loan the company used to finance its 4G LTE open wireless broadband network. LightSquared is indirectly owned by Phil Falcone's Harbinger.  When the company delivered its first-day petition to the U.S. Bankruptcy Court in Manhattan, it disclosed that Harbinger indirectly owned approximately 96% of its outstanding common stock. LightSquared Inc. has issued 91,878,629 shares of common stock to a subsidiary of Harbinger, and 3,387,916 shares to SK Telecom Co., Ltd. (NYSE:SKM). The company also said it had $4.48 billion in assets and $2.29 billion in liabilities as of Feb. 29, 2012. In addition to the $320 million secured loan obtained by the parent company, a LightSquared unit also obtained a $1.5 billion loan pre-bankruptcy.  At the end of the November 2012 operating period, LightSquared revealed it still is illiquid with $211 million in current assets and $2.1 billion in current liabilities.

Established in 1985, LightSquared began to develop its 4G LTE wireless broadband network in 2010 and has already invested more than $4 billion to the project. The project was opposed by the Global Positioning System (GPS) industry, complaining that LightSquared's terrestrial base stations may cause widespread overload interference to GPS receivers and other GPS devices.

The latest legal battle over LightSquared's pre-bankruptcy debt is in addition to the company's difficulty in obtaining approvals for its 4G LTE network from the GPS industry and the Federal Communications Commission. In response to the Bankruptcy Court request, Harbinger said the ad hoc committee of secured lenders do not have a standing to pursue the claims because they can be repaid the money owed by LightSquared as the company is valued more than its debts, at as much as $7 to $12 billion. In addition to the Bankruptcy Court dispute, Harbinger Capital and Falcone are also facing suits filed by the U.S. Securities and Exchange Commission for allegedly defrauding investors.

LightSquared's saga is typical of a bankruptcy case where lenders are trying to throw in their force so that they can regain what they lost. LightSquared's future though lies in the feasibility of its breakthrough satellite network services, one that has been economically and politically difficult to push through in the broadband industry.

Several Christmases ago, I stopped buying NCAA-branded gifts for my football fanatic in-laws, because the NCAA’s treatment of student-athletes is abysmal. Recent reports that some college sportswear is being... Read More

Today, Prime Minister Antonis Samaras of Greece struggles to pull his three-party coalition back together long enough to pass austerity measures that will open bailout funds during his nation’s... Read More 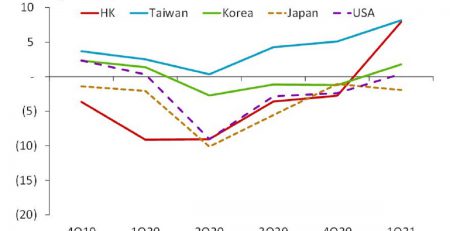 Economies In Asia Are Turning

1Q21 GDP recovery in North Asia, except for Japan Q1 2021 hedge fund letters, conferences and more North Asia showed less of a fall in 2Q20 GDP (the height of the... Read More