William F. Sharpe suggested the idea of investment styles as early as 1978 in a general paper about investment (Sharpe 1978). He later refined the idea of style analysis in (Sharpe 1988) and applied it to asset allocation in (Sharpe 1992). The Morningstar Style Box popularized the size vs. value categorizations during that same year. Sharpe (1992) defined four criteria that characterize a benchmark style: 1) “identifiable before the fact,” 2) “not easily beaten,” 3) “a viable alternative,” and 4) “low in cost.”

We propose that equity liquidity is a missing investment style that should be given equal standing as the currently accepted styles of size (Banz 1981), value/growth (Basu 1977; Fama and French 1992, 1993), and momentum (Jegadeesh and Titman 1993, 2001). When assembled into portfolios, these styles define a set of betas which can only be beaten if portfolios provide an extra positive alpha.

The literature focusing on the relationship between liquidity and valuation in the U.S. equity market has grown dramatically since Amihud and Mendelson (1988) used bid-ask spreads to show that less liquid stocks outperform more liquid stocks. Other researchers have confirmed the impact of liquidity on stock returns using various measures of liquidity. Despite this significant and multifaceted body of evidence, a recent survey of the last 25 years of literature on the determinants of expected stock returns found that liquidity is rarely included as a control (Subrahmanyam 2010).

In our paper we use stock turnover, which is a well-established measure of liquidity that is negatively correlated with long-term returns in U.S. equity markets. Haugen and Baker (1996) and Datar, Naik and Radcliffe (1998) demonstrated that low turnover stocks on average earn higher future returns than high turnover stocks. We examine stock-level liquidity in a top 3,500 market cap universe of U.S. equities from 1971-2011 and subject it to the four style tests of Sharpe. Our empirical findings, which extend and amplify the existing literature, are that liquidity clearly meets all four criteria.

In the sections that follow, we individually examine each criterion in turn. Section 2 focuses on turnover as a stock-level metric that identifies liquidity “before the fact.” We then look at the long-run performance of liquidity and demonstrate that it is “hard to beat.” Section 3 examines cross-sectional returns for each style and demonstrates with double-sort portfolios that the liquidity style of investing is a distinctly “viable alternative” from the established styles of size, value, and momentum. In section 4, we further show that liquidity is additive to size, value, and momentum by creating a liquidity factor that is compared with the other three style factors. In section 5, we show that liquidity management is “low in cost,” since liquidity migration is not only relatively infrequent, but also is associated with sizable returns when it does occur. Section 6 offers discussion and concluding remarks, summarizing how liquidity meets the Sharpe criteria for an investment style. An appendix describes the datasets and stock universe used in our analysis.

There are numerous ways to identify liquidity. Amihud and Mendelson (1986) used bid-ask spreads to explain a cross-section of stock returns. Brennan and Subramanyan (1996) regressed price impact of a unit trade size from microstructure trading data. Amihud (2002) developed a metric using the average price impact relative to daily trading volume of each security. Pástor and Stambaugh (2003) demonstrated that stock returns vary with their sensitivity to marketwide liquidity.

We use stock turnover as our “before the fact” measure of liquidity. It is a characteristic, but it can also be expressed as a covariance factor. Another frequently used liquidity metric is the Amihud (2002) metric which is also readily measured, although Idzorek, Xiong, and Ibbotson (2012) showed that turnover exhibits greater explanatory power for U.S. mutual fund returns. A single “perfect” measure of liquidity is unlikely to exist, since Brown, Crocker and Foerster (2009) found that liquidity measures may encode momentum and information effects in large-cap stocks.

Liquidity as an Investment Style via SSRN

Italy's Referendum - D-Day approaches - what you need to know On 4 December, Italians are set to vote on the constitutional reform proposed by Prime Minister Matteo Renzi, in what... Read More

OFR: CCP Attempts To Reduce Counterparty Risk, But Creates Its Own Risk

As risk is transferred to a central clearing mechanism, gauging that risk and funding risk management are considered Read More 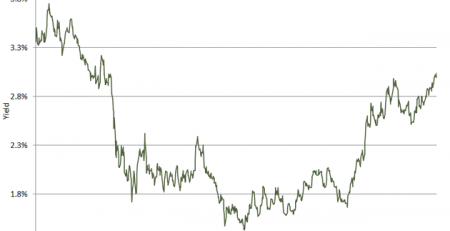 When Most Investors Believe Something, It’s Usually Wrong