Longleaf Partners Small-Cap Fund lost 1.27% in the quarter, trailing the Russell 2000 Index’s 0.42% return. Year-to-date the Fund returned 4.64% versus the index’s 4.75%. Over longer periods, the Fund’s performance surpassed the index. For the last three and five years, Longleaf Small-Cap far exceeded our annual absolute return goal of inflation plus 10%, as it did for the last 20 years.

In the second quarter, the majority of our companies made positive business progress, as our management partners took smart actions to drive value growth. Although most investments were positive performers in the quarter, much of our partners’ value-building efforts at the businesses we own is not being fully reflected in the fund’s returns. Our energyrelated companies, where a meaningful amount of beneficial activity has occurred and is ongoing, were the largest drag on relative and absolute performance. Our 15.5% net cash position and underweighting to the index’s top performing sector, healthcare, also weighed on relative returns.

Film studio DreamWorks Animation was the largest positive contributor in the quarter, up 9%. The company had a box office success with the late March release of the movie Home. The company’s AwesomenessTV gained traction, as did CEO Jeffrey Katzenberg’s push in the Chinese film distribution market via the 45% Oriental DreamWorks JV, which has the potential for meaningful upside. DreamWorks’ efforts to develop television content also progressed well. We support Jeffrey Katzenberg and his team 100%. The market has focused on some of Dreamworks’ new movie misfires in recent years, but Katzenberg’s long-term value creation record is incredible. A major hidden weapon and important part of our calculus is the presence of Mellody Hobson as Chairman. We feel very fortunate to partner with this pair, and to own these incredible assets.

Another strong performer, Vail Resorts, the largest owner of ski resorts in the world, gained 6% in the second quarter. While visitors were down slightly due to historically poor snow in California, lift ticket pricing rose 15%. CEO Rob Katz purchased the Perisher ski resort in Australia at an attractive price. The acquisition supports Vail’s strategy to attract more customers to its resorts through loyalty programs and seasonal passes, and early indications are encouraging. The companyis also pushing ahead with its plans to link Park City Mountain Resort and The Canyons in Utah.

Bermuda-based reinsurance company Everest Re added 5% in the second quarter. The company reported strong quarterly results, with earnings per share and return on equity (ROE) above consensus, and bought back shares at a 3% annualized rate. CEO Dom Addesso has a track record of executing well in a challenging environment. He is focused on growing the primary insurance business, which this quarter reported a significantly improved combined ratio.

As noted, our energy-related holdings were the primary performance detractors. Over the last year we have adjusted our valuations for the more austere conditions following dramatic oil, gas, and coal declines. However, our asset quality and capable leadership teams make us confident that these companies should be meaningful contributors to strong returns going forward. Any bounce back in commodity prices will be additional upside. At CONSOL Energy, which was the largest performance detractor in the quarter, falling 22%, lower commodity prices have served as a catalyst to sharpen management’s focus on how best to optimize the returns on their valuable assets. In the quarter, the company reported operating cash flow (OCF) above Wall Street expectations and repurchased deeply discounted shares at a 4% annualized pace. Positive gas basis differentials versus NYMEX and good cost control at the Buchanan metallurgical coal mine contributed to the solid results but could not overcome the continued pressure on coal prices. In adjusting to the current commodity price environment, the company announced several cost-cutting measures, including a move to zero-based budgeting. Over the last few years, prior to and since we bought Small-Cap’s position, our discussions with management have been productive and contributed to adding board members, monetizing assets, and separating disparate segments. In the recent quarter CONSOL monetized non-core thermal coal assets in the Bailey Mine Complex by offering shares in the master limited partnership (MLP) CNX Coal, which generated $200 million in proceeds. The price was below earlier expectations because of lower coal prices. Management is pursuing additional value accretive monetization opportunities where proceeds can be reinvested in higher return alternatives, including CONSOL’s undervalued shares.

We bought one new position and did not exit any investments. Weakness in the Macau (China) gaming market provided the opportunity to purchase Wynn Resorts at a substantial discount to our appraisal. Wynn owns some of the world’s prime real estate through luxury gaming and hotel operations in Las Vegas and Macau as well as a future location outside Boston, Massachusetts. Through its 72% ownership of Wynn Macau, Wynn controls a gaming and hotel complex on the Macau peninsula and is completing an additional project in nearby Cotai. Over the next few years, revenues across the six Macau operators should improve as new casinos with diverse non-gaming attractions and much-needed hotel room supply, as well as ongoing government investments in infrastructure, will facilitate more visitors. More immediately, the reversal of the transit visa restriction announced on June 30 is the first sign of supportive regulatory policy to improve economic conditions in Macau. This should be positive for VIP and premium mass volumes. In the U.S., with a prime location on the Strip, the company’s Wynn and Encore casinos are among the most profitable in Vegas. Steve Wynn has been a successful owner-operator who has made money for shareholders over a long period and has positioned the company to weather the Macau downturn while having a pipeline of casinos for future growth.

We believe the Longleaf Partners Small-Cap Fund is well positioned to meet our absolute goal and deliver strong relative performance. The price-to-value ratio (P/V) is in the mid-70s%. The U.S. small cap market has no margin of safety, with mergers, acquisitions, initial public offerings, and share buybacks near 2007 peak levels and at multiples well above our appraisals. Our net 15.5% cash provides dry powder to act quickly as new names qualify. We remain focused on owning discounted, strong businesses that can generate organic value growth and that have good managements who are pursuing opportunities to build and monetize value per share. We are engaged with our management partners to varying degrees and believe their near-term steps to close the gap in price will reward us.

Long only hedge funds can finally celebrate a bit (at least a bit)... As we look at the returns for the first quarter of the year from Long/Short equity hedge funds,... Read More

Did Capital One run into a Commodity Pre-Pay Wall ?

In our last post we touted a too-big too fail return in the commodity-sector (a name nobody dare to pronounced. Today prices are down but market volatility is up... Read More 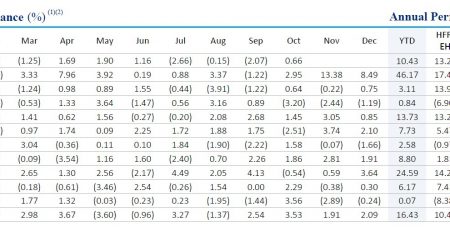 Those with a forward looking mathematical outlook see the inevitable. Greece’s debt level is unsustainable and growth projections do not take into account a worse case scenario. Even if... Read More