Mario Gabelli, GAMCO Investors chairman & CEO, weighs in on the likelihood of a Viacom/CBS merger and why he would like to see Bob Iger run it. Also Gabelli shares his thoughts on the AT&T/Time Warner deal, and the future of News Corp.

Gabelli: Markets Are Adjusting To Trump

Technology Will Not Replace All Finance Jobs… Not Yet, Anyway

Much like a price trend in markets, technology trends have points that can be considered a “crest” where mean reversion takes place. With a harangue surrounding computers taking human... Read More 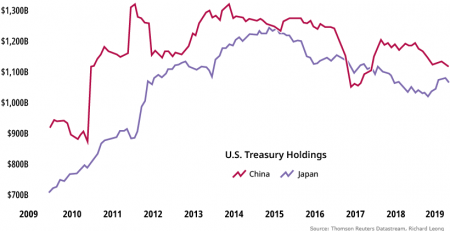 In the international finance system, U.S. debt can be bought and held by virtually anyone. Q1 hedge fund letters, conference, scoops etc In fact, if you hold a U.S. Treasury bond... Read More

With another strong jobs report under the belt – 211,000 new workers were added in November, the market learned from the government's unemployment report out this morning – Janet... Read More

One of the most significant marketing opportunities in the history of the global economy may be the emerging consumer market in China. According to a report in the SINO... Read More