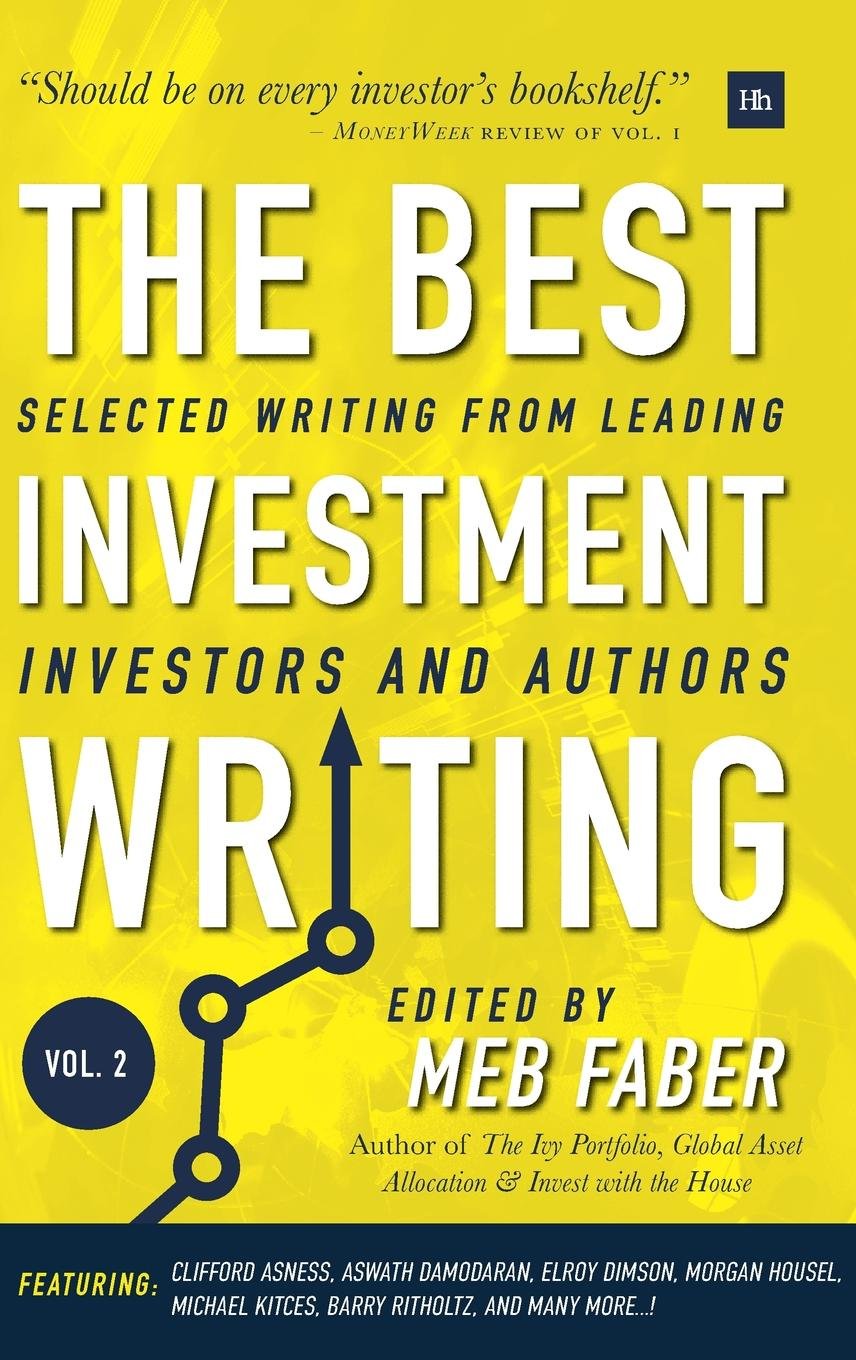 If you didn’t read the first volume of Meb Faber’s The Best Investment Writing (and you should have and of course still can), you’re got another crack at learning from a lot of smart folks who collectively manage hundreds of billions of dollars. The second volume of The Best Investment Writing (Harriman House, 2018) includes more than 40 articles, and, since the book runs about 350 pages, the articles are bite-sized. Most of them originally appeared online and were geared to a semi-distracted readership, which increasingly describes all of us.

The articles are organized under four headings: market conditions, risk and returns; investment portfolios, strategies and edges; pricing and valuation; and personal finance, behavioral biases and beyond.

Here I’ll recap two articles that appealed to me and that lent themselves to summary. The second criterion ruled out many excellent contributions. For instance, trying to summarize Barry Ritholtz’s “An Expert’s Guide to Calling a Market Top: The landscape is filled with pundits predicting the demise of the bull market. Here’s how to get in on the action” would be like trying to summarize a Letterman top-10 list. The task would simply produce a pale imitation of the original.

And so, to the two articles I chose. First, “10,000 Hours or 10 Minutes: What Does It Take to Be a ‘World-Class’ Investor?” by Charlie Bilello, originally published on the website of Pension Partners. From the title you can surmise that Bilello will debunk the applicability of the 10,000-hours rule to trading/investing. He argues that luck trumps skill in investment outcomes and that, in looking at the successes of the market wizards of years past, we can’t determine with certainty whether their performance was the result of skill or luck. More important, “even if we concluded that there was some skill involved, doing x, y, and z because a ‘market wizard’ did x, y, and z in the past is a guarantee of nothing. …the environment they operated in no longer exists. … If the wizards themselves were faced with the task of repeating their prior successes, they too would fail—Warren Buffett would not be the next Warren Buffett if he had to start over again today. Paul Tudor Jones would not be the next Paul Tudor Jones. Stanley Druckenmiller would not be the next Stanley Druckenmiller.” The average investor should simply spend ten minutes learning about controlling costs, diversification, and asset allocation. “In a field where the outcome is driven more by luck than by skill, being a master of nothing (diversifying and protecting yourself from the unknowable future) yields the highest probability of success.”

Second, Samuel Lee’s “Waiting for the Market to Crash Is a Terrible Strategy.” We hear over and over that we should be fearful when others are greedy and greedy when others are fearful. But is this really so? Lee shows that putting cash to work in the market only after a crash has been “an abysmal strategy, far worse than buying and holding in both absolute and risk-adjusted terms.” Using monthly U.S. stock market total returns from mid-1926 to the end of 2016, he simulated variations of the “buy after a crash” strategy, “changing both the drawdown thresholds [from -10% to -50% in increments of 5%] before buying and the holding periods [from 12 to 60 months] after a buy.” In all cases the strategy failed. The reasons? “First, the historical equity risk premium was high and decades could pass before a big-enough crash, making it very costly to sit in cash. Second, the market tended to exhibit momentum more than mean reversion over years-long horizons. As strange as it sounds, you would have been better off buying when the market was going up and selling when it was going down, using a trend-following rule.”

FPA Capital Fund's commentary for the fourth quarter 2014. H/T Dataroma You should consider the Fund’s investment objectives, risks, and charges and expenses carefully before you invest. The Prospectus details the... Read More

With long / short strategies being the most sought after – and having delivered the best returns in the third quarter of 2015, according to a Prequin study reported... Read More

Some thought it would never happen. But in Iceland, the former chief executive of one of the largest banks in the country which was involved in crashing the economy... Read More

What Does Sam Zell Know That Wall St. Doesn’t?

What Does Sam Zell Know That Wall St. Doesn’t? by Horizon Kinetics As part of our ongoing “Cash is a Liability” series (available here), we’ll present a fairly well-known... Read More