There had been rumors swirling of impending layoffs, but Microsoft Corporation (NASDAQ:MSFT)'s announcement that it would cut 18,000 positions was bigger than anyone expected. That’s 12,500 positions related to Microsoft’s acquisition of Nokia Corporation (ADR) (NYSE:NOK) (BIT:NOK1V) (HEL:NOK1V) earlier this year, and another 5,500 from various underperforming segments such as Xbox Studio. But if the goal is to reallocate cash . . . 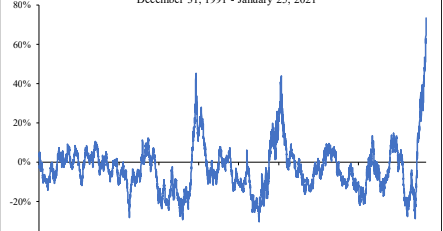 Short-sellers have been feeling the pain for months, but especially over the last two weeks. In his fourth-quarter letter to investors, Maverick Capital's Lee Ainslie pointed out the unprecedented... Read More

Deutsche Bank analysts Paul Trussel and Matt Siler observe 40%-85% markdowns this time of the year when promotions are the name of the game. “As is normal this time of... Read More

In Defense Of Short-Selling – And The SFC – In Hong Kong

In Defense Of Short-Selling - And The SFC - In Hong Kong by Anonymous Analytics - this article was first published by ActivistShorts - for some background on AA... Read More

On Every Metric EU, Japanese Equities Cheaper Than US Stocks

Last week Morgan Stanley explained why it thought we could be in for one of the longest market expansions on record, pushing the S&P 500 to 3000 in the... Read More

Balancing your check book used to be the starting point for financial literacy, but many people who have bank accounts today don’t know what fees they are paying or... Read More

When an activist decides that a new CEO is the most effective lever of value creation, should they be responsible for determining who fills the role? At both CSX and... Read More