Moody's ratings agency has downgraded seven of Germany's banks today citing risks from the Euro crisis as the reason behind its decision. The region is still suffering from depression relating to certain countries' sovereign and private debt issues. The problem looks without solution and so stable financial institutions proximal to the crisis are suffering as a result.

The biggest among the banks downgraded was Commerzbank AG (ETR:CBR). That institution is Germany's second biggest and so has the most to lose from . . .

Rough notes of Matthew J. Smith, CEO & CIO of Deep Basin Capital LP, from the 2019 Sohn Investment Conference which took place on the 6th of May. See our... Read More

The Securities and Exchange Commission has filed a motion against Clayton Cohn and his company MarketAction Advisors LLC, saying that he has been defrauding vets with a Ponzi-like scheme... Read More

We live at a time where the unthinkable has become common

By Steve Blumenthal “We live at a time where the unthinkable has become common.” — B. Scott Minerd, Managing Partner, Guggenheim Partners Do you remember the story book The Little Engine That... Read More

Goldman Sachs says that we are now looking at a ‘regime change’ from steadily rising EPS and PE multiples supercharging market returns over the few years to falling PE... Read More 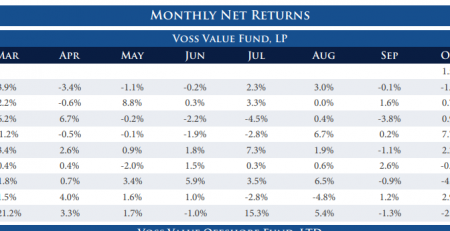 The Voss Value Fund, LP added 14.5% in November, taking its year-to-date gain to 14.7% net of fees according to a copy of the firm's latest investor tear sheet,... Read More

The innovation of undetectable radar could change warfare to a degree. On the battlefield, traditional radar systems are used to detect incoming aircraft. The problem is, with radar, the radio... Read More