We document a positive relation between mutual fund performance and managers’ willingness to take big bets in a relatively small number of stocks. Focused managers outperform their more broadly diversified counterparts by approximately 30 basis points per month, or roughly 4% annualized. The results hold for mimicking portfolios based on fund holdings as well as when returns are measured net of expenses. Concentrated managers outperform precisely because their big bets outperform the top holdings of more diversified funds. The evidence suggests that investors may enhance performance by diversifying across focused managers rather than by investing in highly diversified funds.

More than $3 trillion are currently invested in equity mutual funds, and despite the growing number of index funds the vast majority remains actively managed. Yet beginning with Jensen (1968), research has consistently shown that actively managed mutual funds do not outperform their benchmarks on average.1 More recent attention focuses on characterizing the minority of funds that do outperform. Several studies indicate that positive performance persists,2 but Carhart (1997) attributes the persistence to simplistic momentum strategies (Jegadeesh and Titman (1993)) rather than fund manager skill. Other work focuses on fund manager characteristics. For example, Chevalier and Ellison (1999) find evidence that performance is influenced by the quality of the mutual fund manager’s education.

In this article, we examine portfolio holdings and characterize mutual fund managers based on their willingness to take big bets in a relatively small number of stocks. The theoretical impact of manager focus on performance is unclear. The behavioral literature suggests there may be a negative relation between concentration and performance.

Psychologists show that in general most people are overconfident about their abilities. People are particularly overconfident when conducting difficult tasks with low predictability such as picking stocks (Griffin and Tversky (1992)). A number of studies document overconfidence among individual investors (e.g. Odean (1999)), which manifests itself through excessive trading and under-diversified portfolios. If mutual fund managers that are willing to take big bets on a select group of stocks do so as a result of overconfidence, then concentrated managers may be associated with poorer risk-adjusted performance.

On the other hand, research on herding among security analysts points towards a positive relation between portfolio concentration and performance. Trueman (1994) predicts that confident analysts are more willing to make bold earnings forecasts whereas less confident analysts typically issue forecasts that are near the consensus. Empirically, Clement and Tse (2005) find that bold earnings forecasts are more accurate than herding forecasts, and Gleason and Lee (2000) show that forecast revisions that deviate from the consensus produce larger price impacts. These results suggest that unconfident analysts are either less skilled or else face career concerns that make them downplay their private information and follow the herd (see also Hong, Kubrick, and Solomon (2000)).

Mutual fund managers also face incentives to herd. Siri and Tufano (1998) find that investors generally do not pull their money out of mediocre funds – portfolio managers must significantly underperform to experience outflows. As a result, fund managers that have built a sizable asset base may become risk averse, preferring to broadly diversify rather than take large bets that could lead to outflows. Wermers (1999) finds evidence that funds herd into and out of individual stocks. If herding reflects career concerns rather than investing conviction on the part of mutual fund managers, it is possible that concentrated managers could outperform their more broadly diversified counterparts. Our evidence indicates a positive relation between fund performance and managers’ willingness to take big bets in a relatively small number of stocks.

Worst Performing Assets - what would be your guess for the answer? Which assets should you have owned during 2016 to achieve the best returns? Analysts at Source Research, the... Read More

This Formula Will Help You Avoid Dividend Cutters Like Kraft Heinz 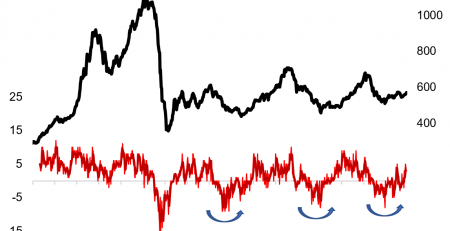 In this post I want to share with you an interesting section from our recently published 2019 End of Year Special Edition of the Weekly Macro Themes report (a summary of... Read More