To the Friends of Neosho Capital,

It was a very good quarter for European equities markets in general despite the ongoing wrangling between the Eurozone and Greece over the Greek bailout package. European markets have responded positively to their version of Quantitative Easing (a $1.2 trillion bond buying program). European QE at present seems to be having the intended effect on the Euro and the European bond market: the currency has dumped 20% of its value against the Dollar and an increasing number of Euro bonds, sovereign and private, have negative yields. Whether Euro QE will translate to sustained economic growth and substantial job creation remains to be seen and is the subject of our commentary this month.

Things weren’t quite as rosy in Brazil and Russia with their economies heavily dependent on oil, gas, metals, and other commodities. With falling prices, both economies are forecast to have negative GDP growth in 2015. Furthermore, the leaders of both countries are facing major political issues at home. Brazilian and Russian equities have been punished, and we have remained cautious and conservative in valuing securities in those markets. In keeping with our sensitivity to leverage, we are avoiding companies that took on cheap Dollar debt over the past 2-4 years, but may now be facing rising debt service as a result of their home currencies being devalued against the Dollar (i.e. more Reals/Rubles needed to service the same amount of Dollar debt). Valuations in those markets look very inexpensive, and we will invest in Brazilian and Russian equities as long as the business fundamentals can hold up in a challenging environment.

We won’t get into the business of speculating on oil prices, but we do believe the ample evidence in tanker rentals, storage tanks, and pipelines that there is no shortage of global oil. Softness in oil and gas prices for the next year or would not surprise us. Wall Street analysts expect the United States may run out of storage space for crude oil very shortly. Presently the US has roughly 471 million barrels of oil in inventory, the highest level since 1930.

Neosho Capital – ECB NIRP and QE: The Charge of the Monetary Light Brigade

Last quarter we focused on Japan’s “monetary banzai charge” in its battle against deflation and low growth, so it is only fitting that this quarter we turn our attention towards Europe and the adoption by the European Central Bank (ECB) of a negative interest rate policy (NIRP) to go along with its planned $1.2 trillion of bond purchases.1 Spoiler Alert: in keeping with our view on Japanese monetary efforts, likewise we believe the Europeans are well-meaning, but misguided, in their efforts to solve demographic, cultural, and political problems with massive monetary manipulations of exchange rates and securities markets.

In June of 2014, ECB President Draghi formally initiated NIRP by announcing that the ECB would pay -0.10% on particular kinds of deposits which the ECB accepts from its member banks. In essence, European banks that had excess reserves will now pay for the privilege to park those funds at the central bank, the first such move by any of the major central banks in history. Denmark and Sweden were the first to dip their toes into NIRP back in the 2010 timeframe. A Danish banker likened dealing with negative rates as “learning to drive a car backwards.” Indeed, there is even such a thing as “negative mortgage interest” home loans in Denmark, if the concept of negative deposit rates was not enough to boggle the economic mind.

Draghi followed this move up in March of this year by initiating Quantitative Easing via monthly sovereign bond purchases of €60 billion until at least September 2016 (18 months), or roughly $1.2 trillion in total bond purchases.2 The scale of European QE is about 1/3 the size of the Japanese effort and 1/4 the size of the Fed’s QE program. Given this gap in scale, it must be Mr. Draghi’s hope that negative interest rates (now with a lower bound of -0.20%) will somehow catalyze or magnify the impact of its significantly smaller QE bond purchasing program.

The two charts below, tracking the 2 and 10year European and US bond yields tell the tale of the tape as far as Europe’s NIRP’d and QE’d interest rates go. For the typical 2 year sovereign bond in Europe you can expect to pay 25 basis points each year for the privilege of owning a Euro-denominated government bond versus earning about 50 basis points per annum owning its US equivalent. If you extend your timeframe to 10 years, you will receive a whopping 0.19% of interest annually over the coming decade. The compound return of such an investment, before transaction costs, will be 1.9% for the entire ten year period. Meanwhile almost 10 times that amount of interest is available for those willing to take the perilous trip across the Atlantic to buy10 year US government bonds. We find neither investment particularly compelling.

It is safe to say that nominal interest rates (i.e. quoted and advertised rates) have never been lower in the US, Europe (including its German, French, Italian, and Dutch antecedents), the UK, Switzerland, and Japan going back to the dawn of reliable information on such things, which can be 1900, 1850, or 1800, depending on the country in question. This is undoubtedly a pivotal moment in global financial history, one that any long-term participant will mark as they do the record high US Treasury yields of 1981, the Crash of 1987, the Dot Com Bubble Burst of 2001, and the Lehman Crisis of 2008/9. These 5 major currencies easily account for 75% plus of global trade and wealth.

Andreas Halvorsen's Viking Global took up a new position in Apple Inc. (NASDAQ:AAPL), buying 112,200 shares of the tech company. Like all other tiger cubs who seem fixated on Priceline.com... Read More 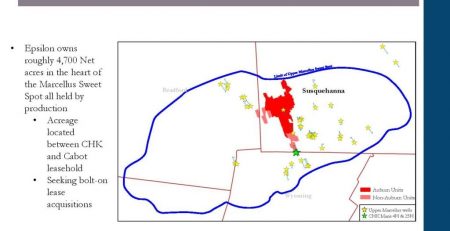 Epsilon Energy Is A Grossly Undervalued Gem Off The Beaten Path

Are you looking for a profitable and debt-free company with attractive key metrics, high insider ownership and strong catalysts? Do you also want it to be off the beaten... Read More