Pfizer, one of the world’s largest pharmaceutical companies,1 has announced that it has entered into preliminary discussions with the Irish corporation Allergan to effect a business combination, which most observers assume would be structured as an “inversion” transaction. An inversion would allow Pfizer to renounce its U.S. tax citizenship while retaining its current U.S. headquarters, management structure and facilities.

Pfizer executives have made no effort to hide that their latest inversion attempt is intended to dramatically cut its U.S. tax bill. The company’s leaders say they believe that Pfizer’s worldwide effective tax rate—which was reported as 25.5% in 2014—could be sharply reduced if the corporation’s legal address is shifted to Ireland through an inversion with Allergan.

This report finds that Pfizer appears to be dramatically overstating its corporate tax rate, and that the company may be paying taxes on its worldwide profits that are effectively tax-haven rates. Thus, Pfizer does not appear to be at a competitive disadvantage operating under the U.S. tax system—if anything it is highly advantaged. An inversion would lock in these current advantages and extend them further.

With an inversion, Pfizer essentially would continue to enjoy all the benefits of being an American corporation but just not pay the taxes required for that privilege. Pfizer would not pay its fair share for its educated workforce; use of our transportation systems; the protections provided by our strong judicial, banking and regulatory systems; and so much more that makes America one of the top countries in the world in which to do business, ranking number three according to the World Economic Forum.

Key findings in this report include:

Pfizer executives have made no effort to hide that their latest attempt at an inversion, this time with Allergan, is to dramatically cut the company’s U.S. tax bill. The company’s leaders say they believe that Pfizer’s worldwide effective tax rate—which was reported as 25.5% in 2014–could be sharply reduced if the corporation’s legal address is shifted to Ireland through an inversion (or through some other type of merger) with Allergan.

It is difficult to assess the validity of that claim as Pfizer’s financial filings are very murky given the apparently large amount of income shifting the company does from the United States to its 151 subsidiaries in 10 tax havens across the globe.

ATF, with the assistance of tax experts, has analyzed Pfizer’s Securities and Exchange Commission (SEC) filings. A fair reading of those filings is that the company’s reported income tax rates are largely an accounting fiction. Specifically, ATF estimates that Pfizer’s worldwide tax rate was as low as 7.5% in 2014, rather than the 25.5% tax rate Pfizer reported to the SEC. Moreover, Pfizer’s five-year tax rate between 2010 and 2014 averaged just 6.4%, as opposed to the 24% reported to the SEC. [Figure 1] That means the company’s effective tax rate was about 75% lower than it has claimed.

Why do we suggest that Pfizer’s true global tax rate was closer to 7.5% in 2014 and to 6.4% over the last five years? The answers require a deep dive into the arcana of financial accounting for taxes—in particular, deferred tax liabilities. A brief explanation is provided immediately below, with a fuller explanation after that.

As Figure 1 shows, in 2014 Pfizer reported $12.2 billion in worldwide pretax income, and a worldwide income tax provision of $3.1 billion. This computes to the 25.5% tax rate claimed by Pfizer. At the same time Pfizer reported in a tax footnote that the $3.1 billion tax liability in 2014 included $2.2 billion in “deferred” taxes to the U.S. These are taxes the company says it will pay sometime in the future, attributable to foreign profits it plans to repatriate to America. But it did not pay them in 2014 and there is no reason to believe that it will happen in the future.

Most U.S. multinationals elect to designate all of their offshore business profits as indefinitely reinvested outside the United States, which are known as Permanently Reinvested Earnings, or PRE. Under financial accounting rules, if a U.S. firm declares that its offshore profits will be indefinitely reinvested outside the United States (i.e., PRE) then financial accounting treats the foreign income taxes paid as the final taxes on that income. As a result, a company making the PRE designation is not required to create any U.S. deferred tax liability at all with respect to those offshore earnings, because the presumption is that the earnings will not be repatriated as cash to the United States, and therefore will never become subject to U.S. tax.

Pfizer has done just this—it has designated $74 billion in accumulated foreign profits as PRE (see next section).Unlike many other companies, however, Pfizer has not made the PRE designation with respect to many billions of dollars of additional foreign income each year. As a result, Pfizer must provide a financial deferred tax liability (a tax reserve) for the U.S. corporate income tax that theoretically might one day be paid on those offshore profits not designated as PRE.

This is reflected in Pfizer’s 2014 financials, for example, by the disclosure deep in the tax footnotes that Pfizer’s $3.1 billion tax liability in 2014 for financial accounting purposes includes $2.2 billion in “deferred taxes”—taxes the company says it will pay sometime in the future–attributable to foreign profits it plans to repatriate to the United States at some later date.

The company has made a very similar statement in each of the last five years. Since 2010, Pfizer has claimed that it would eventually pay a total of $11.3 billion in U.S. taxes on foreign profits when these profits are eventually repatriated. During this period, the company’s cumulative deferred tax liability for unrepatriated foreign earnings has increased from $9.5 billion to $21.2 billion [Figure 1 and Appendix 1]. Pfizer has not paid any actual U.S. tax on this $21.2 cumulative liability, and need not do so in the future.

In effect, Pfizer created a second “stealth” PRE account that amounts to a pure accounting reserve for U.S. taxes that may never be paid. By our estimate, this second stealth PRE account is roughly as large as Pfizer’s explicit designation of permanently reinvested earnings–i.e., another $74 billion as explained below.

That means up to $148 billion in profits are parked offshore on which Pfizer has not paid and may never pay any U.S. taxes.

This second stealth PRE account is estimated as follows:

In sum, Pfizer has $74 billion of acknowledged Permanently Reinvested Earnings, which are profits Pfizer is reporting are never coming back. It has another $74 billion or so of “stealth” PRE–profits Pfizer is pretending it will bring back and pay taxes on to make the corporation look respectable to tax authorities, lawmakers and the financial industry. There is no real meaningful difference between these two piles of profits even though they are reported much differently.

Why would Pfizer make this odd decision to provide a U.S. tax charge for repatriating such a large amount of offshore earnings, and then not follow through on it by actually bringing the cash back to the U.S. parent?

One possible reason is that this choice makes it appear that the company is paying a substantial tax rate when it is not. If we take Pfizer’s word that it will eventually pay these taxes, then its effective worldwide tax rate over the past five years seems respectable: on $60.2 billion of pretax income, it has claimed a tax bill of $14.4 billion, for a 24% worldwide tax rate. But if the apparently-fictional deferred taxes on foreign profits are subtracted, Pfizer's remaining tax bill for these five years is just $3.9 billion, for a 6.4% five-year effective tax rate.

Value And Growth Stock Price Behavior During Stock Market Declines Get The Timeless Reading eBook in PDF Get the entire 10-part series on Timeless Reading in PDF. Save it to your... Read More

Fannie Mae – Bailout Lawsuit: Will Banks Ever Get a Fair Hearing Anywhere?

Earnings To Show Divergence Between Alts And Traditional Asset Managers

1Q EPS estimates for Alts could be higher due to stronger portfolio returns, while Traditionals could witness a drop in EPS due to lower average AUM balances, reports Morgan... Read More 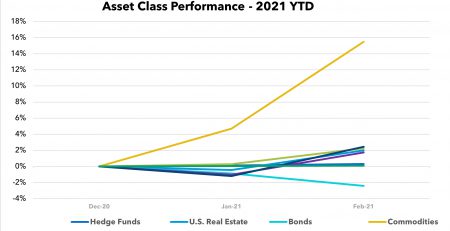 Last year it feels like all we talked about was the rough performance of commodities and now we’re reading headline after headline of a 2021 commodity supercycle “driven by... Read More

No, the Economy Isn’t Re-Opening Soon