Prem Watsa on Fairfax Financial Holdings Ltd (TSE:FFH) earnings call is still very concerned about deflation and China in particular. Below are some select remarks from the call in the first segment and on the Q&A

We continue to be approximately 100% hedged in relationship to our equity and equity-related securities, which include convertible bonds and convertible preferred stock. Any movement above or below 100% are balanced in the following quarter.

We continue to be very concerned about the prospects for the financial markets and the economies of North America and Western Europe, accentuated, as we have said before, by potential weakness in China.

As we have said now for some time, there continues to be a big disconnect between the financial markets and the underlying economic fundamentals. As of June 30, 2013, we have over 29% or $7.5 billion in cash and short-term investments in our portfolio to take advantage of opportunities that come our way. In the short term, our investment income will be reduced.

The last 5 quarters, on average, are at 1.4% each quarter. So that means it's a very tepid economic growth. And on top of that, you have — if you take core inflation, excluding energy and food, it's the lowest in 50 years. Now you look at these 2 facts and think about the fact that you've had QE1, QE2, QE3 and you've had huge stimulus in the United States, and you've had such weak growth and no inflation to speak of. Now if the economy stumbles or if China has a problem — and there's all sorts of concerns about China, as you all know, and Europe continues to be flattish, we worry about things like that. And we worry, as we've said to you for some time, about deflation.

Everyone's worried about inflation, and have been worried for 5 years. Remember, 2 things, and we've said that it in our annual meeting. One, it took 5 years for deflation to set, to come in, in Japan. After the bubble broke in 1989, it was 1995 that deflation set up began. And then for the next 17 or 18 years, you had deflation in Japan. And the second is just because we are all here very big fans of Ben Graham, Ben Graham said in 1925 — in the '30s, he said, after the Crash, after the Depression took hold, that if you weren't bearish in 1925, there was a 1-in-100 chance you'll survive the Depression, 1-in-100 chance. If you weren't bearish long before 1929, meaning 1925, there was a very small chance you survived. So we are very concerned. We don't take this lightly. We're watching this very, very carefully. I mean, if we hadn't hedged, we'd make, I don't know, another $500 million, something like that.

Now we can easily buy corporate bonds. We've been in the business for 40 years, and they're stepping away. We think you're not being paid for risk, so we're stepping away from the marketplace. I'll remind you, then, in 2008, 2009, when stock markets were down, we were fully invested. And when spreads were wide, we bought corporate bonds and we bought all sorts of bonds. Today, we think there's a significant amount of risk, and we think you have to be very, very careful. And there's all sorts of unintended consequences in the marketplace because of what's happening in the United States, particularly, but perhaps elsewhere. And so this is our way of protecting ourselves, like we did with our credit default swaps, and just being very, very careful.

2014 Markel Conference: Notes From The Q&A

Notes from the 2014 Markel Conference Meeting. Tom Gaynor & Steve Markel Q: (from David Winters). Would you ever do anything that's dilutive. TG - Markel Corporation (NYSE:MKL) was a family business.... Read More

Tocqueville Investor Letter - Year End 2014 It is a little-known fact that gold outperformed all currencies in 2014, except for the US dollar. In dollar terms gold declined 1.7... Read More 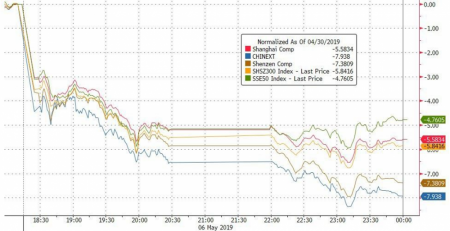 The World Of Activist Investing In April by Activist Insights A total of 96 companies worldwide were publicly subjected to activist demands in April 2016, one more than in the same... Read More