Private equity portfolios have the potential to create value for investors over many years. This feature reflects the relatively long-term nature of the asset class, with funds often following a lifecycle of 10 years or longer. As a result, the performance of mature private equity funds is highly relevant to investors, not least since the secondary market has made it possible to pro-actively manage private equity portfolios and dispose of fund positions perceived as offering limited remaining upside.

Pantheon has undertaken a number of research studies that have investigated the residual value that might be expected from mature private equity portfolios1, as well as the early “tells” that have the potential to indicate how a given portfolio is likely to perform compared to peers2. Both of these studies aimed to assist private equity professionals in assessing the potential trade-offs of selling out of certain positions as opposed to the more passive approach of retaining them until maturity.

In this paper we explore two additional features of the lifecycle of private equity funds. In Section 1, we examine the potential impact of carried interest (“Carry”) in aligning private equity managers (“GPs”) with their clients (“LPs”) in terms of generating strong performance later in the fund’s life. In Section 2, we consider the extent to which private equity funds have historically “jumped” across quartile rankings. The implication here is that the stickier or more persistent the quartile ranking of a fund at an early stage, the more visibility one has over the potential future performance of a private equity portfolio.

Both of these issues are directly related to our previous research in this area and should help provide readers with an additional set of considerations to bear in mind when assessing portfolios.

The relevance of Carry in explaining mature fund performance

Prior research studies undertaken by Pantheon have examined how private equity funds tend to behave as they mature, the degree of dispersion in these outcomes, and the extent to which mature fund performance may be linked to the quartile ranking of a fund at any given point in time. What our studies did not explicitly consider, however, was the impact that Carry may have on mature fund performance and the ability to estimate which funds are likely to retain significant upside.

Many investors rely on Carry as a way of aligning themselves with the GPs to whom they commit capital. After all, if a private equity manager is able to share in the upside, this should motivate and incentivize them to generate the best possible returns for investors from the outset.

However, what happens once the Carry hurdle has been met? Once a fund is “in-Carry”, does this appear to incent a GP to generate additional upside? If so, does this additional upside tend to exceed the value subsequently generated by GPs who had not (or had not yet) met their Carry threshold? Figure 1 below summarizes the question we are seeking to address.

We collected performance data on almost 700 private equity funds (buyout and venture5) globally and looked at whether there was a difference in the subsequent or “incremental” performance generated, from any given point in time, depending on whether or not a fund was estimated to be in-Carry6. Our hypothesis was that, once a fund had crossed its Carry threshold, the incremental performance of these funds until liquidation was likely to exceed that generated by funds of the same age that had not crossed the Carry threshold.

To the extent that the likely prospect of receiving Carry motivates GPs to continue generating strong performance for investors in the future, since the GP will directly participate in those gains, we expected to find a positive relationship between a fund’s relative incremental performance and its Carry status. We classed a fund as “likely to be in Carry” if its observed IRR was greater than or equal to 8% p.a., at any particular point in time. We chose this as our proxy for whether or not a fund is in Carry because 76% of funds summarized in Metrick and Yasuda (2010, Table 2)7 have a Carry hurdle equal to 8%. Our results are summarized in Figure 2 below.

As can be seen from the chart, our hypothesis appears to be supported by the data. Based on our historical dataset and period under observation, there does appear to be a consistent pattern of incremental outperformance by funds likely to be in Carry at any particular point in time, compared to funds of the same age but not (yet) in Carry. A test of statistical significance9 revealed that the median incremental IRR of funds estimated to have crossed their Carry threshold was statistically higher than the incremental IRR of funds not yet likely to have crossed their Carry thresholds, for funds aged between seven and 10 years. Moreover, this result is robust if, instead of using the Carry proxy based on the IRR hurdle of 8% as described earlier, we class a fund as being in Carry if its DPI10 is greater than one. This indicates that, regardless of the proxy used to identify funds that are likely to be in Carry, our main result holds. In general, we prefer to use the IRR based measure as our proxy, on the grounds that it is closer to the measure according to which Carry is evaluated in practice, and therefore we can reasonably believe that if a fund has an IRR greater than 8%, this might influence the behavior of GPs.

We then proceeded with a range of further robustness tests, using our IRR based proxy. First, we analyzed geographic sub-samples to verify whether the relative incremental outperformance of funds that had met their Carry threshold applied to both geographies. The main results observed for the full-sample also hold for the European and U.S. sub-samples, however, perhaps because there were only 75 funds in the European subsample, we did not observe statistically significant results for this geography11.

We also explored the extent to which our results differed by stage. When we partitioned our dataset into buyout and venture funds, we found that the difference in the median incremental IRR between in-Carry and not-in-Carry funds was still economically significant12 for buyout funds at year nine. However, the results for the venture sub-sample were less conclusive. As a result, it appears that buyout funds are driving our results. One possible (but at this stage entirely speculative) explanation for this phenomenon is that buyout managers may have a greater ability to influence incremental value creation in their funds and portfolio companies once these reach a relatively mature stage, and are therefore more able to respond to the Carry incentive.

Relevance of vintage as a possible explanation

But could our overall results, as set out in Figure 2, be vintage-dependent? Or put another way, are the results explained by any particular vintage or set of vintages? To answer this question, we grouped the funds within our sample into chronologically-adjacent groups of 40 funds13. This approach allowed us to compare the median incremental IRR performance of the in-Carry vs. not-in-Carry groups within each time period, thereby controlling for any vintage effects and, in particular, controlling for the possibility that the in-Carry funds from Figure 1 are from good vintages and the not-in-Carry funds are from poorperforming vintages.

We examined the statistical and economic significance of our results, in terms of the observed incremental outperformance of in-Carry vs. not-in-Carry funds, when grouping funds into our chronologically adjacent cohorts of 40 funds. We found that for funds aged between seven and nine years the in-Carry subset still had an economically significant level of incremental IRR outperformance, lending further support to our initial results14.

Overall, and combined with the vintage-controlled results referred to earlier, we believe this further validates the significance of our results and the apparent relationship between crossing the Carry threshold and the potential for future outperformance.

The implication is that Carry does appear to be an effective motivational tool for GPs. Based on the Preqin dataset, crossing the Carry threshold appeared to spur GPs on, at least relative to GPs who were lagging behind, to generate additional value for investors and crystallize Carry proceeds for themselves. Our study suggests that the funds in our historical dataset that are above the Carry threshold have the potential, particularly between years seven and nine, to perform more strongly from that point onwards than those funds that have still failed to cross the Carry threshold.

Though some financial market indicators are consistent with past recession trends, current conditions are overall similar to those in 2011-12, and risk indicators at current levels are not bound... Read More 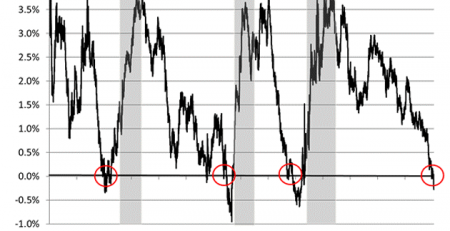 As Morgan Stanley analysts turn tactically cautious on U.S. credit, they recommend that investors sell this rally or at least put hedges in place. Adam Richmond and team said in... Read More