Is there a link between public debt and growth? Yes, in all periods since the 1950s

The results obtained by Reinhart and Rogoff (RR) (loss of growth when the public debt-to-GDP ratio exceeds 90%) have recently been criticised by Herndon-Ash and Pollin (HAP) (see Bibliography at the end), especially because of calculation errors. However, RR have for the most part maintained their conclusions that public debt has a negative impact on growth.

Our own examination of the analysis carried out by RR, over a long period (around 50 years), shows a substantial dispersion of the data, which leads to a very low explained variance (in terms of linear regression) and therefore does not provide a convincing link.

We wanted to pursue a more in-depth analysis of the data initially used by RR by limiting the calculations to shorter periods in order to determine whether a more explanatory character in terms of the correlation can be observed. We also want to look at the link between public debt and growth by introducing a possible non-linearity and by looking not only at the effect of public debt on growth, but also the effect of the primary fiscal surplus that stabilises the public debt ratio.

Charts 1A to F show, for the 20 OECD countries, the average public debt ratio and average growth over the following periods:

The regression between the 20 countries of average growth on the average public debt ratio gives a convincing result only for the periods 1990-2012 and 2000-2012.

The figures in brackets under the coefficients are Student’s t, which indicate the significance of the coefficient when they exceed 2. The important criterion in this analysis is R2 (part of variance explained), which is markedly (6 to 10 times) higher when we analyse more homogenous time periods (excluding post-war periods, away from oil shocks) than the approach initially used by RR.

The explanatory nature (R² close to 0.4) is therefore totally acceptable.

Growth = a + b (debt ratio) + c (debt ratio)², which would have introduced a nonlinear effect of the debt ratio, did not give any result.

We can see that from 1990 to 2012 and even more from 2000 to 2012, the link between public debt ratio and growth rate is significantly negative. This can be seen clearly in Chart 1F.

But the problem is the sequence of two heterogeneous periods, around oil shocks. If we look at the period 1950-1969, we can also see a negative relationship between public debt ratio and growth from 1950 to 1969.

A particularly low level of interest rates makes a high debt ratio sustainable by requiring only a small primary surplus.

We obtain, for example:

In the 1980s, 1990s and 2000s, until 2012, the public debt and the primary fiscal surplus required to stabilise the public debt ratio are clearly significantly negatively correlated to growth.

Correlation does not equal causality: we could even imagine the opposite causality, i.e. that it is growth that makes it possible to reduce the public debt.

The purchase of this "Mona Lisa of Apartments" was done for "fun," violating some of his apparent investing methods Read More

Weitz Investment Management letter for the first quarter ended March31, 2016. Get The Timeless Reading eBook in PDF Get the entire 10-part series on Timeless Reading in PDF. Save it to... Read More

Lee Cooperman has some fans these days... All the negative press surrounding risk parity this year has started to concern asset managers who currently use risk parity strategies to boost... Read More 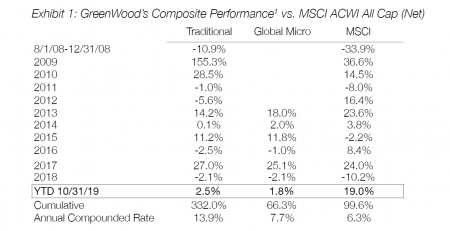 This may surprise people, but accounting isn’t a black and white endeavor—there’s actually a lot of gray area—particularly when you deal with accruals and estimates for future events. This... Read More