It was a disappointing second quarter for PepsiCo, Inc. (NYSE:PEP) and WellPoint, Inc. (NYSE:WLP) as the companies saw profit declines and missed estimates, respectively.

In the second quarter, PepsiCo saw a $1.49 billion profit ($0.94 cents a share), down from the $1.89 billion ($1.17 a share) in the previous year. Without acquisition-related charges, derivatives impacts and other items, earnings fell to $1.12 from $1.21, reported the Wall Street Journal.

The company commented on rising commodity prices, notably corn, which is used in the sweeteners for its drinks but PepsiCo Chief Financial Officer Hugh Johnston said that corn equates to about 10 percent of PepsiCo’s total costs, according to the Wall Street Journal.

On Wednesday, Johnson said on CNBC, “The drought is terrible but corn is less than 10% of our total commodities basket. No commodity individually even accounts for 10% of our basket.”

So with that story, let’s take a look at how PepsiCo’s numbers compared to its rival, Coca-Cola Company (NYSE:KO). Its net income for the second quarter was $2.79 billion ($1.21 per share). The result is slightly lower from the previous year’s $2.8 billion ($1.20 per share).

With the quarter’s lower revenue, the company attributed it to rising ingredient costs, according to ValueWalk. It had lowered  ingredients expenditures to $300 million, down from its previous $350-$450 million forecast. In 2011, Coca Cola’s Chief Executive Officer, Muhtar Kent noted the company increased prices for its products, in order to offset the rising costs for ingredients.

The company has estimated its full-year profit between $7.30 to $7.40 a share. Helping the company’s numbers this year, is lower medical costs from 2011, as people were less likely to visit the doctor.

But Ana Gupte, a Sanford C. Bernstein & Co. analyst, said with costs steadying in 2012, it’s more difficult for profits to rise. He said via Bloomberg, “Cost trends have been flattening out as opposed to declining. Last year, the whole industry had a really favorable tailwind, whereas this year, it’s been a different story.” 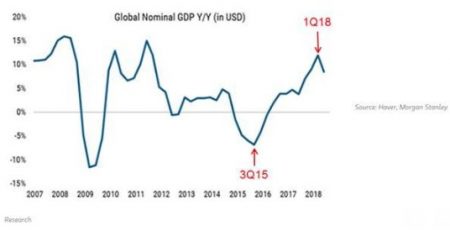 The bull market following the US Presidential election has been stunning. But with the specter of multiple Fed interest rate hikes on the horizon and markets stretched to their... Read More

Many fund managers expect performance and investment decisions to be affected, while institutional investors expect to commit less to the UK via Preqin Also see top hedge fund letters Both the... Read More

A case study of Warren Buffett and Charlie Munger's investment in and management of Blue Chip Stamps that includes letters from 1978 to 1982 (final letter before merger with... Read More

In this segment from 'Big Problems. Big Thinkers,' billionaire investor Warren Buffett reflects on what success means to him. Get The Full Warren Buffett Series in PDF Get the entire 10-part... Read More

As I have explained for a while, the U.S.-China conflict is much more extensive than a “trade war.” It is an ideological conflict of comparable powers in a small... Read More

A Look At Returns: Coke Vs Russian Stocks