Because geopolitics is playing a greater role in driving economies and markets than any time in my over 50 years of investing, I am thinking a lot more about it. As you know, I believe that a) most important things happen over and over again in basically the same ways because the most fundamental cause-effect relationships are timeless and universal (and logical), and b) right now conflicts both within countries and between countries are increasing because of increased wealth/income/opportunity gaps, diverging values, and rising powers (most importantly China) emerging to challenge existing powers (most importantly the US).  As in the past, these conditions are leading to the rise of populism, which is leading to important policy shifts to influence economic outcomes (like tariffs, economic sanctions, capital controls, big corporate tax cuts, etc.) that are having big market implications.

These conditions now exist a) in the later stage of the short-term debt cycle (nine years in) when slack is limited and central banks are shifting from being stimulative to being restrictive, and b) in the later stage of the long-term debt cycle when debt and non-debt obligations (like pension and healthcare obligations) are high, interest rates are near 0%, and printing money to buy financial assets will have a reduced stimulative effect. This risky configuration of circumstances has occurred numerous past times, most recently in the late 1930s.

Around 18 months ago, we did a study on populism (attached), which helped us to better understand it and led us to focus on how conflicts are being handled because that was the single most important indicator of how events would transpire. The most important international conflict is between the US and China, so we have been monitoring it closely.  As the title conveys, this conflict is spreading beyond trade. Notable recent developments include:

It should now be clear to everyone that this is not just a trade war. Where exactly this broader confrontation/war leads is unknown to anyone, including the policy makers who are setting policy.  We can visualize a wide range of scenarios—ranging from a conflict limited to tariffs that would raise inflation and lower growth a bit, to a much more serious conflict that disrupts supply lines in ways that have big negative impacts on companies’ efficiencies and profits, to the US prohibiting important technologies built in China from coming into the US (or vice versa) and other products (like luxury brands) that hurt these companies, to a capital war in which China boycotts or sells treasuries, to there being a testing of each other militarily.  While there will be ebbs and flows in the relationship, as far as the symmetry of the surprises goes, it seems to me that they are more asymmetrical on the downside relative to what the market is discounting.  As this is happening in the later stages of both the short-term and long-term debt cycles while central banks are tightening with the duration of assets long (because interest rates are so low), this is an environment in which we prefer to have a risk-off posture. 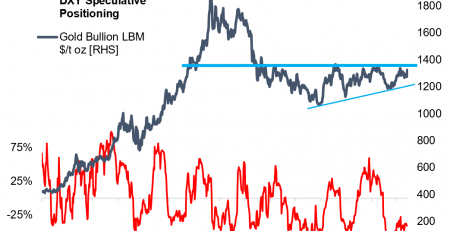 David Herro: Have Courage of Your Convictions

David Herro: Have Courage of Your Convictions The Oakmark manager notes how a long-term view, with strict buying and selling discipline and preparedness for short-term weakness, has allowed his international fund... Read More

The Procter & Gamble Company (NYSE:PG)'s profit beat expectations on Thursday. These soaring profits follow a beat down from activist investor William Ackman, who at the beginning of the month made... Read More