The US Securities and Exchange Commission is investigating whether the marketing of the TerraUSD stablecoin before it crashed last month violated federal investor-protection regulations, according to a person familiar with the matter.

SEC enforcement attorneys are looking into whether Terraform Labs, the firm behind the coin also known as UST, broke rules for securities and investment products, said the person who asked not to be named discussing the confidential probe. The stablecoin was supposed to maintain a 1-to-1 peg to the US dollar through an algorithm and trading in a related token called Luna.

The implosion of UST starting on May 7 sent shock waves across crypto markets. In the aftermath, Treasury Secretary Janet Yellen said the episode exposed the dangers of tokens that purport to be pegged to the US dollar and Acting US Comptroller of the Currency Michael Hsu called it a “wake-up call.”

The SEC investigation may ratchet up pressure on Terraform and its Chief Executive Officer Do Kwon, which are already facing scrutiny from the regulator for offering another crypto project known as the Mirror Protocol, which lets people to trade digital assets that track the price of US stocks. Neither Terraform nor Kwon has been accused of any wrongdoing related to UST.

The SEC declined to comment. Terraform Labs, which is based in Singapore, said in a statement that it wasn’t aware of an SEC investigation into UST. “We are not aware of any SEC probes into TerraUSD at this time – we’ve received no such communication from the SEC and are aware of no new investigation outside of that involving Mirror Protocol,” Kwon said in a separate statement.

The Terra Luna stablecoin logo on a smartphone arranged in the Brooklyn borough of New York, US, on Monday, May 16, 2022. The collapse of the Terra ecosystem, and the tokens Luna and UST, will go down as one of the most painful and devastating chapters in crypto history.

Stablecoins play a critical role in crypto because their relatively steady value can provide a safe haven for many investors in the highly volatile market. Unlike others that purport to be backed by cash and similar assets to maintain their peg, UST used algorithms and trader incentives to maintain its price.

Under the mechanism, every time a UST token was created, a dollar’s worth of Luna — the value of which was determined by the market — was destroyed, or vice versa. If the price dropped below $1, traders were motivated to swap UST for Luna, which would decrease the amount of the former in circulation and drive up its price. A computer program would work in tandem to do the same. The opposite occurred if UST’s value rose above $1. 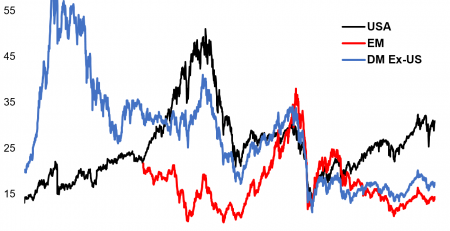 Today's chart comes from the recently launched "Top 5 Charts Of The Week" report - which is our entry-level subscription service. If you like our charts you'll love that... Read More