Only less than half of China’s foreign-exchange reserves are liquid i.e. in the form of Treasury notes, cash, and gold.

China's possible net capital flight is in excess of $800 billion in 2015, liquid reserves could be depleted sometime in 2017, which could spell market uncertainty ahead.

Watch for the pace of gold’s bullish trend and the RMB’s bearish trend to accelerate.

Gold and silver are both trading highest since January 2015

Sanjay Bakshi On Reading, Mental Models, Worldly Wisdom, And Investing via Shane Parrish, Farnam Street This is the third episode of The Knowledge Project, my podcast aimed at acquiring wisdom through... Read More

Buy Trinity Industries: It Can't Get Any Worse

Paul Tudor Jones ““Cry ‘Havoc!’, and let slip the dogs of war” seems an apt description for this moment”

Paul Tudor Jones feels “like I’m in my 20s again.” In a February 2 letter to investors reviewed by ValueWalk, where he quotes Shakespeare, the well-known hedge fund manager... Read More

Which is the best performing asset class this year? If you include the whole universe of investable assets, gold wins the race but if you look at equities and... Read More 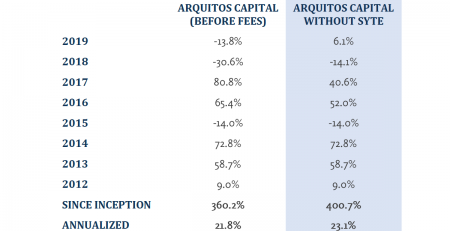 Arquitos Capital Management commentary for the fourth quarter ended December 31, 2019. Q4 2019 hedge fund letters, conferences and more Reality is that which, when you stop believing in it, doesn’t... Read More

This does not come as a surprise, the doom of commodity trades and hedge funds was written quite a while ago and all or at least most of the... Read More

Buybacks are expected to rival pre-crisis highs in absolute terms this year and to make up as much as a quarter of corporate cash use, and the practice is... Read More