With Correlation So High Why Are Hedge Funds Underperforming The S&P 500 By So Much? – ValueWalk Premium

With Correlation So High Why Are Hedge Funds Underperforming The S&P 500 By So Much?

A recent Goldman Sachs Hedge Fund Trend Monitor led its report by addressing a perplexing question in the hedge fund community. The report noted that in 2014 hedge fund performance by their measure was a paltry 1 percent at a time when the S&P 500 average was up 13.7 percent.

Even given the slightly higher performance of the BarclayHedge Hedge Fund Index, which was up just 2.89 percent in 2014, hedge funds dramatically underperformed stocks last year when compared to . . .

Apple Inc. (NASDAQ:AAPL) released its earnings report for the third quarter of 2012 this afternoon after the market close. The report put Apple's earnings for the quarter at $9.32... Read More

The Muni Meltdown that Wasn’t

Municipal bonds, or munis, don’t get anywhere near as much press as sovereign bonds let alone equities, but when the financial crisis was still fresh in everyone’s mind and... Read More 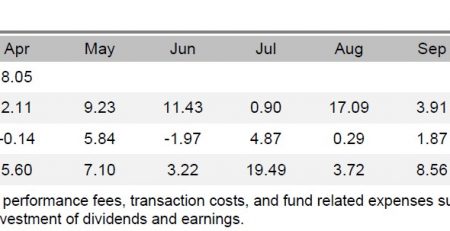 U.S. Secretary of the Treasury Jacob Lew in a speech Monday at the Tax Policy Center that the department will decide “in the very very near future” on how... Read More

Even China Failed To Curb Bitcoin, Which Reached Another All-Time High

Bitcoin seems invincible, as the Chinese government's constant efforts to crack down on the digital currency are proving futile, according to Bloomberg. Bitcoin is a decentralized digital currency which... Read More