The Dallas Fed released the 12mo Trimmed Mean PCE of 1.67% which was higher than last month’s revised lower 1.60%. To the historical comparison of the SP500 and the Value Investor Index has been added the 100% trend line. Markets are driven by market psychology in response to earnings, social themes and other events at the time. Historically, recent peaks, 2000&2007, had Momentum peaks at 100% and 65% respectively. The current market reflects a high level of foreign investors involved in Momentum activity and a high level of economic stimulus by the current administration. There is no tool to estimate how high investors can drive prices with any degree of reliability. 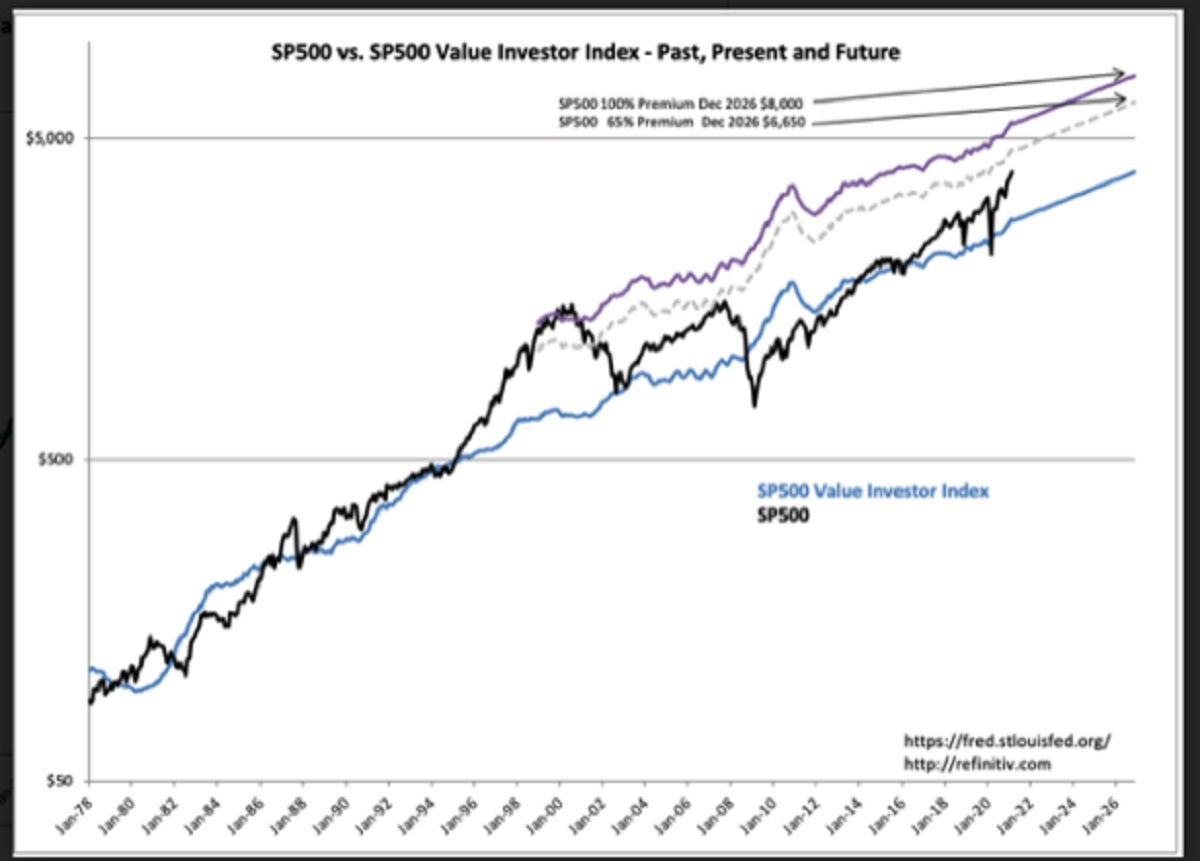 With this in mind, the Value Investor Index serves as a fundamental value indicator for the SP500 based on long-term Real GDP(the Real Private GDP is used), the long-term SP500 earnings trend and an inflation measure (12mo Trimmed Mean PCE). Extending the Value Investor Index and the 65% and 100% Premium trend lines to 2026 provide guesses based on past behavior of $6,650 and $8,000 for the SP500 respectively.

Are these reasonable estimates? Nothing is reasonable at Momentum driven market peaks! However, one cannot remain out of the markets for 5yrs-6yrs expecting a correction to permit getting back in at a reasonable price level when the liquidity is as high as we have currently and Momentum investors who have already demonstrated a willingness to pay any amount for news that was better than expected.

The recommendation is to stay invested in well-managed companies which represent the core US economy, the back-to-work economy. Momentum being what it is, is very likely to exit the very narrow field of favored growth issues which benefited from the COVID-19 lockdown and shift to emerging earnings trends in many out of favor issues favored by a normalized economy. Pricing can get well out of hand, but should persist till the next inverted yield curve. That level in 2026 could exceed $8,000 for the SP500. Keep in mind, this is pure guesswork. Even though there exists historical precedent, it does not mean that it will repeat.

Quam Asset Management pulled further ahead of the pack as its Quam China Focus Segregated Portfolio continued to be the top performing fund of 2015, with 59.71% returns through... Read More

Data from Preqin’s Hedge Fund Analyst reveals that hedge funds have suffered their worst first quarter in terms of performance since 2008, with the Preqin All Hedge Fund Strategies... Read More