Nearly all companies describe their ideal shareholder as having a long-term investment horizon, but in the real world, about half of companies’ shareholder base has a short-or medium-term horizon. As a result, most companies see significant upside to managing their shareholder base, and senior leaders spend considerable time meeting with current and prospective investors.

“More than three-quarters of companies in our survey see significant stock market benefits from managing their shareholder base,” says Professor Anne Beyer, Associate Professor of Accounting at the Stanford Graduate School of Business and co-author of the study.

“Companies believe that if they can identify and attract the right shareholder base, they will be able to increase the price of their stock and decrease its volatility.”

“Companies want long-term shareholders in particular because it allows them to implement their corporate strategy and make long-term investments without the distraction and short-term performance pressures that come from active traders,” says Professor David F. Larcker, James Irvin Miller Professor of Accounting and Senior Faculty at the Rock Center for Corporate Governance. “We find that the investor relations department can create a real competitive advantage by attracting a shareholder base with the same long-term investment horizon as the company.”

The study, conducted in partnership with the National Investor Relations Institute (NIRI), surveyed 138 investor relations professionals at North American companies about the investment horizon and expectations of their shareholder base and the impact that these expectations have on corporate decision-making.

“Investors with short-term horizons pay close attention not only to stock prices in the near term but also the companies’ short-term performance as reported in their financial statements. If short-term projects yield lower returns on investment than long-term projects as it is often the case, a shareholder base dominated by short-term investors can become a real challenge for companies,” says Professor Larcker.

Not surprisingly, most companies agree or strongly agree that desirable shareholders are not activists (87%). About two-thirds of companies don’t want a concentration of ownership and do pay attention to the price at which an investor acquired a company’s shares. The geographical location in which the shareholder resides plays virtually no role with only 7% of the companies deeming this an important shareholder characteristic.

Investment Horizon: Composition of shareholder base

1. What is the investment horizon of a typical investor (in years)?

2. How important are the following to a long-term investor? 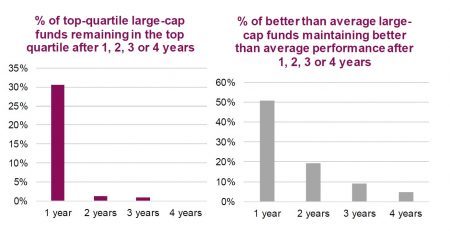 Floats And Moats I am going to talk about two different ideas. Floats. And Moats. Over the last few months, I have been obsessed by these two ideas. I have spent a... Read More

Nomura analyst Bilal Hafeez takes a day dreamer’s approach to trading in a June 15 report. Looking back year-to-date at the best currency trades, Hafeez considers the best of... Read More

Which EMs Are Most Exposed To Higher US Interest Rates?

Who in emerging markets will get hit the worse by higher interest rates? The US Federal Reserve decided to raise its key interest rate by 0.25% yesterday marking the second... Read More

Back when the great Phil Knight was building Nike from the ground up, liquidity was a persistent worry for him. More realistically a nightly one. Blue Ribbon’s (the original... Read More

As the hunt for yield intensifies, investors are now piling into emerging market bonds as they look under every rock to try and the best returns on the global... Read More