The Psychology Of Decision Making by Amos Tversky, CFA Institute

Three areas of “cognitive illusion” that violate basic assumptions of the classical economic model of decision making are risk attitudes, mental accounting, and overconfidence. Their existence indicates that the rational economic model is incomplete in a systematic way. The three phenomena also provide clues to many market anomalies and investor phenomena, and understanding these biases may suggest ways to exploit them in the market.

Financial markets are influenced by many complex factors, including economic processes, institutional and political constraints, the flow and dissemination of information, and last but not least, people’s reactions to and perceptions of risk. Studies of judgment and decision making indicate that people do not always behave in accord with the classical rational model of economic decision making. The classical analysis assumes that people are perfectly consistent, satisfy criteria of coherence, and have unlimited computational power. The evidence, however, shows that human rationality is bounded by both emotional and cognitive factors.

This presentation addresses some basic elements of the psychology of risk. It does not attempt to provide a comprehensive theory of investor psychology; instead, it reviews and illustrates a few salient findings. Specifically, the discussion focuses on three phenomena-risk attitudes, mental accounting, and overconfidence-that violate basic assumptions of the classical economic model of decision making. These phenomena are often referred to as cognitive illusions because, like visual illusions, they relate to perceptions that often remain compelling and tempting even when people realize they are illusory or fallacious.

One of the fundamental assumptions of the economic analysis of risk that is built into portfolio theory is the assumption of risk aversion. Analysts assume that, holding expected value constant, people would rather have a certain return than an uncertain return, and that people need to be compensated for bearing risk. Although risk aversion is quite common, it fails in some situations.

Consider the following problem. You have a choice between a sure $85,000 or a risky prospect that offers an 85 percent chance to receive $100,000 and a 15 percent chance to receive nothing. Both prospects have the same expected actuarial value: If you play them over and over again, you will receive on average the same amount. The great majority of people, however, would rather receive $85,000 for sure than take the chance of receiving nothing. This preference illustrates the notion of risk aversion.

Because risk aversion does not hold in all cases, a different model from the classical model is called for. Figure 1 presents a hypothetical value function that captures observed human responses to gains and losses. This S-shaped function has three features that distinguish it from the concave utility function of classical economic analysis. First, it is defined in terms of gains and losses rather than in terms of asset position, or wealth. This approach reflects the observation that people think of outcomes in terms of gains and losses relative to some reference point, such as the status quo, rather than in terms of a final asset position. Because people cannot lose what they do not have, classical economic theory does not address losses. The language of losses presupposes that people evaluate things relative to some reference point; so, the domain of this value function is gains and losses rather than wealth.

The second feature is that the value function is concave above the reference point and convex below it, which results in the characteristic S shape. This feature means that people are maximally sensitive to changes near the reference point: The first $1,000 gained is the most attractive, and the first $1,000 lost is the most unattractive. This observation is consistent with a great deal of research on perception and judgment. For example, the illumination inside a room at noon may be several orders of magnitude less than outside, yet the people in the room adjust to the inside level and see each other quite clearly. They are not aware that the room is dark in comparison with the street. However, they instantly notice even a small change in the brightness of the light in the room. The same is true for many dimensions of human experience, including monetary changes.

The third feature of the value function is that it is asymmetrical; the loss curve is much steeper than the gain curve. A loss appears larger to most people than a gain of equal size; a loss of, say, $5,000 is generally perceived to be much more aversive than a gain of $5,000 is attractive. This characteristic, called loss aversion, explains why most people are not willing to toss a fair coin to decide whether they will win or lose $100. Experiments show that faced with a 50/50 chance to win or lose, people require a potential gain of $200 to offset a potential loss of $100. In other words, a 50/50 chance to win $200 or lose $100 is barely acceptable to most people. Mark Twain put it best when he said, “Wives do not so much object to their husbands gambling. They object to their husbands losing.” The losses, not the risk per se, are what drive people’s preferences.

Loss aversion-the greater impact of the downside than the upside-is a fundamental characteristic of the human pleasure machine. Think of how well you feel today and use that as your reference point. You probably can think of days on which you were a little more energetic and felt a little better. Do you imagine things could be a great deal better or only slightly better? Now imagine how much worse they could be. You probably imagine things could be slightly better but infinitely worse. We have probably evolved to be very sensitive to losses and much less sensitive to gains. 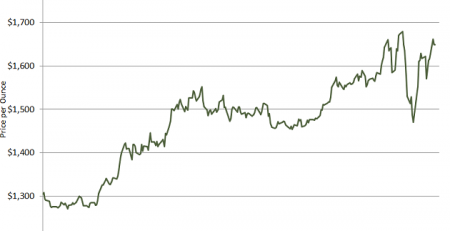 The Fed is more or less doing modern monentary theory (MMT) as we speak. Q1 2020 hedge fund letters, conferences and more But rather than giving printed dollars to the Treasury,... Read More

Trend And Cycle In The Yield Curve: A Procedure For Forecasting Recessions Jacob B. Smith University of Houston - Department of Economics November 6, 2015 Abstract: This paper presents a new procedure... Read More

“The most important item over time in valuation is obviously interest rates… If interest rates are destined to be at low levels, it makes any stream of earnings from investments... Read More