Billionaire Investor Carl Icahn spoke with FOX Business Network’s (FBN) Trish Regan about the 2016 presidential election. When asked whether he likes GOP presidential candidate Carly Fiorina, Icahn said, “I really don't think Carly can beat the Democrats” and that “I think they’re going to pull out all the stuff on Hewlett-Packard and all the stuff on Lucent.” When asked about GOP Presidential Candidate Donald Trump not being specific enough on his ideas, Icahn said, “I think it is a bit of an unfair criticism.  I don't see too much coming from any candidate.” Icahn also commented on Apple CEO Tim Cook saying, “I’ve always liked Tim Cook.  I thought he was doing a great job and I still think he’s doing a great job.”

Carl Icahn on putting his excitement behind Donald Trump:

“Well, I think that we have to go against the establishment both in Washington and Corporate America.  And I think he – you know, he's not beholden to anybody.  And he can stand up to the more – the normal politico.”

Carl Icahn on Trump calling him for advice instead of funds:

“That's correct.  You know, I mean there is a lot of dysfunction in Washington today.  I mean, as I mentioned, a quintessential example right now is this highway bill and not doing it and repatriating funds over in foreign countries.”

Carl Icahn on Trump being criticized for not speaking specifically enough about issues:

“I think it is a bit of an unfair criticism.  I don't see too much coming from any candidate.  I mean, I think it's a little premature at this time.  He did come up with a tax plan and I really think that he’s going to have a lot to say. But basically, essentially I think that we need somebody in Washington, sort of like a Teddy Roosevelt, who’s going to stand up to the establishment.  You know, Roosevelt took on J.P.  Morgan.  So, yes, I think you need that.  I think that right now we really have problems.  I mean, you can't look at it day by day but I think over a period of time you have some major problems in this country.  I mean, the economy certainly isn't good.  And that’s with zero rate interest rates.  It’s still not — I don't think we're doing so well.”

“Look, I really don't think Carly can beat the Democrats.  I think they’re going to pull out all the stuff on Hewlett-Packard and all the stuff on Lucent and they’re going to have some — I mean, she has to really address them and I don't think she has.  So, I mean, you know, when you do look at a candidate, when you go into the general election, it’s going to be tough, right?”

“We really didn't do very much.  I have never really done much business with Donald.  I mean, we were involved in the same company, Taj Mahal, at one point, but I never — you know, I’ve known him for years.  And I find him to be, look, as far as talking to me about business and whatever, he has been very reputable.  But I never really have gotten into any deals with Donald to speak of, so I can't speak to that.”

“Well, I’ve always liked Tim Cook.  I thought he was doing a great job and I still think he’s doing a great job.  We just — they wanted buybacks.  And I think we did get them increased somewhat.  We're responsible for that.   But, I think Tim Cook is good operator.  But there’s a lot of companies we're involved with are really, there’s a lot of criticism to be made of them.  And these guys make a fortune.  You got guys making $45 million a year and the average worker is making nothing.  The shareholders aren’t making anything… Yeah, the board, yes, they hide behind the business judgment rule.  Well, in fact, I think the SEC today said, and I think it’s good thing that they’re going to hold these guys, some of them individually, responsible.  I mean it’s sort of ridiculous right now.  You know, when they finally do go after a company from doing all these things, then who pays for it?  The shareholders anyway.  So you hide behind this business judgment rule, which I think is going to change and it should change.”

Carl Icahn on what zero interest rate policy means for the future of the American economy:

“I think it’s very dangerous.  In other words, I'm not talking about the market next week, next month even.  But I'm saying to you that, right now, I can't understand why companies are selling at multiples.  The S&P really,  is selling not at 18 times earnings but about 22 times earnings because a lot of the earnings are a mirage.  You really — if you really dig into the earnings, nobody seems to want to.”

Carl Icahn on the Nelson Peltz getting involved in GE:

“I’ve talked to Nelson bit.  I really am not — I like to talk about stuff I really know about, really.  That’s my nature.  And I'm no expert on GE.  And I'm sure Nelson has a lot to say about it, so call him.”

Carl Icahn on his take on China:

“Yes, look, I'm not saying I agree with him on everything.  I will just tell you that my points are that we have to do something about the corporate governance of this country.  And we have to do something about the political quagmire we're in.   Now, if you're going to bring special points like free trade, I don't think Donald is saying – but I don't want to speak for him.  I mean, you know, I'm not a political animal so I'm not going to get into these questions.  Of course I have my opinions on them, but the things I feel I know best is corporate America and I think we've got a problem.  We’ve got a problem with companies leaving this country and I think it’s going to accelerate if we don't do something about repatriating that money in and giving a fair share.”

Carlyle Might Be Getting Bargain on Vermillion, as Fund is Down 8% YTD

Vermillion LLC, a New York based hedge fund, is down 7.95% YTD, following another plunge of 1.07% during the month of August, according to information obtained by ValueWalk. Notwithstanding,... Read More

Below is an excerpt from the summer issue of ValueWalk’s exclusive quarterly magazine, Hidden Value Stocks.  The excerpt is part of our discussion on hidden value equities with small-cap... Read More 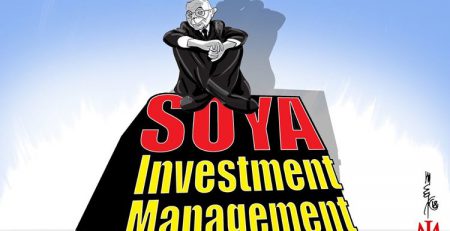 Outperforming the market is hard. Over the last five years, it was easy. Easy if you owned just one stock. The world’s largest. You just had to buy Apple.... Read More