The Competition and Markets Authority has launched a full-blown investigation into Britain’s big banks services for personal accounts and small business banking. The probe, first proposed in July, has now been confirmed by the CMA.

Britain’s four big banks–Barclays PLC (NYSE:BCS) (LON:BARC), Royal Bank of Scotland Group plc (NYSE:RBS) (LON:RBS), HSBC Holdings plc (ADR) (NYSE:HSBC) (LON:HSBA) and Lloyds Banking Group PLC (ADR) (NYSE:LYG) (LON:LLOY)–dominate the market with a combined 77% share of personal current accounts and 85% of business accounts. However, fewer than 60% of the big four’s customers indicate that they are satisfied with their bank, although only 3% of customers switch their bank account each year.

In 2002, the Competition Commission (one of the CMA’s predecessors) investigated small business banking and imposed some restrictions over product bundling. In 2012, on the advice of the government-commissioned Vickers report on banking, a faster switching service for current accounts was introduced. This resulted in 22% increase in switching, though CMA now thinks more action might be necessary.

The CMA will investigate the difficulties customers face in switching banks, the lack of smaller competitors to the “big four” banks, and lending to businesses. Expressing concern over CMA’s latest move, some big banks, including Barclays PLC (NYSE:BCS) (LON:BARC), indicated that the review was “not appropriate at this time,” while Lloyds Banking Group said it did “not consider that such a reference is necessary.”

However, Anthony Browne, chief executive of BBA, which represents the banking sector, said, “Banks are pro-competition – they compete for business every day.” The British Chambers of Commerce said it welcomed the review.

To highlight the dominance of the big four banking groups, some of the smaller players called for the inquiry. Craig Donaldson, chief executive of Metro Bank, said: “No market where such a small number of players hold such a large percentage of the market share should be described as efficient or competitive.”

Not too many new facts may emerge: Investec

Following the latest announcement from CMA, Ian Gordon of Investec, in a report titled “Another assault on bank customers?” expressed doubts about whether any new facts may be unearthed. The report notes that bank customers are still counting the cost of a raft of recent government/ regulatory initiatives, such as the June 2013 introduction of a leverage ratio, which had the effect of inflating mortgage costs. The analyst notes that the eventual implementation of the 2011 Independent Commission on Banking's “ring-fencing” proposals looks set to adversely impact corporations’ choices and costs.

The Investec analyst also points out that switching represents about 3% of the PCA market and 4% of the SME market. The analyst wonders at the omission of Banco Santander, S.A. (ADR) (NYSE:SAN) (BME:SAN), Nationwide from the list while tagging US METRO BANK CA (OTCMKTS:USMT), Tesco Bank and TSB Banking Group PLC (LON:TSB) as “notable recent entrants” in the PCA market.

In the report, Gordon assigned a Sell rating on Royal Bank of Scotland Group plc (NYSE:RBS) (LON:RBS) with a price target of 370p. 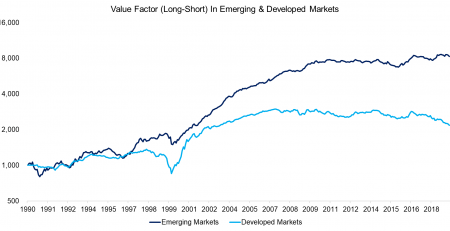 Is It Worth It? Q3 2019 hedge fund letters, conferences and more SUMMARY The trends in factor performance are similar in emerging and developed markets Factor returns were higher in emerging... Read More

During their recent episode of the VALUE: After Hours Podcast, Taylor, Brewster, and Carlisle discussed $Bitcoin Bulls. Here’s an excerpt from the podcast: Q4 2020 hedge fund letters, conferences and... Read More

Vermillion Asset Management's CTA Viridian Ltd. posted losses in March and the fund was down 1.75 percent which brought the detraction for Q1 to -3.35 percent. Commodity strategy has... Read More

Via Natixis Institutional investors anticipate a year of dramatic change in 2017: A global wave of populism is upending conventional thinking about politics and economics. Central bank policies, which... Read More