Societe Generale analysts Julien Turc, Sandrine Ungari, Andrew Lapthorne, Georgios Oikonomou, Vincent Cassot and Aymen Boukhari have a look at risk-premia strategies in a recent report and have a section on value investing and why it beats the market. Is it due to higher risk or is it because of behavioral reasons? Below is a brief excerpt from the paper on this topic.

Value strategies are some of the best known stock selection strategies with origins dating back the work of Ben Graham and David Dodd in their 1934 book “Security Analysis”. The value premium essentially consists of buying undervalued stocks and selling expensive ones, using some form of fundamental valuation metric, with the most commonly cited being low versus high price to book value, as described by Fama and French in their paper.

Given the longevity of the idea – and the irrefutable logic that buying low and selling high should make you money – the value premium is probably the least disputed of all equity risk premia. However, harnessing this is not as easy one might think. Long periods of jobdestroying, negative performance are common and losses can be particularly severe, typically occurring during periods of economic stress. For example, since Fama and French published their paper over 20 years ago, the factor has averaged a return of 3.1% per year in the US but has shown a negative return over the last five years (-0.3%) and lost 20% during the recent financial crisis. Many would have not even have made it to the upswing in 2009.

This well-known value factor is still much debated

Numerous academic papers have investigated the value premium and provided alternative explanations. Supporters of the efficient market hypothesis (Fama & French being among them), argue that the positive excess return earned from value companies is compensation for the higher risk (e.g. distress risk, ability to adapt in difficult economic environments, etc.), hence investors are paid a premium for this additional risk that most often materialises during periods of economic stress7.

Premiums for buying problem stocks and avoiding glamour stocks exist side by side.

On the other hand, many point to behavioral biases such as over-reacting to past performance and extrapolating historical growth too far into the future as potential sources of the value premium8. At SG we suggest that both explanations exist side-by-side, in that there is a premium for buying problem stocks (and therefore having to suffer near-term losses whilst that problem is resolved) and also that there is a premium for avoiding glamour stocks (or just sticking to tediously boring stocks that will pay out over time and with a lot of patience).

We define value using the equal-weighted quintile score of a set of five traditional value factors, which have all been associated with positive returns in academic literature. All factors are taken relative to the median value of the sector, plus where the metric is not applicable (i.e. free cash flow to price for financial companies), we exclude it from the calculation:-
1) Book to Price
2) Earnings to Price
3) One-Year Forward Earnings to Price
4) EBITDA to Enterprise Value
5) Free Cash Flow to Price

A reward for suffering losses

The goal of value strategies is obviously to buy undervalued stocks, although the profile of those undervalued stocks can vary significantly. A value portfolio might invest in companies that have suffered significant price declines and are having difficulties. These difficulties can be company-specific or related to the macro situation at the time. In both cases, the success of the value strategy will be determined by the ability of these companies (and the investor) to sustain losses and eventually fix their problems. Market sentiment is also very important as it affects the degree to which the market is discounting the ability of these companies to bounce back.

Therefore, it is not surprising that we typically see the best performance from value strategies during periods of improving sentiment and economic recovery. For example, from March to November 2009 our value strategy gained 45% (on a long-short basis). On the other hand, during a downswing the returns of the strategy suffer significant drawdown, with our value strategy losing more than 20% during 2007/2008. Potential mechanisms for timing entry and exit points for value strategies would warrant a book in themselves but ideas might include valuation dispersion, absolute valuation, levels of equity volatility and an overall view on the macro cycle itself – all of which are covered in this note with respect to risk premia.

A reward for being dull

Value portfolios might also include companies that are simply out-of-favour, as seemingly they do not offer the same excitement and growth opportunities which investors think they can get elsewhere. Unlike more cyclical value opportunities, these companies are not necessarily riskier but are quite often very well run businesses that have been left undervalued courtesy of their “non-glamour” status or are just classified as dull.

For example, during the dot-com bubble, value strategies (again on a long-short basis) suffered a -20% drawdown as the strategy avoided most TMT stocks (a loss that put many value-managers out of work at the time), but then they rallied 70% the first 12 months after the bubble collapsed. Understanding the exposures of a value portfolio for different types of company is clearly important when assessing the risks (and potential rewards) of the strategy.

The first two charts below show the total return of our value strategy since 1995. The long portfolio has achieved more than three times the equal-weighted index and has outperformed the short portfolio by 13% per year. Notably though, the value strategy has struggled to produce the same returns in recent years.

We also show the drawdown (percentage drop from previous peak) of the strategy and the rolling two-year beta (based on monthly returns). The drawdown chart shows the two main periods of underperformance for value strategies (1999 and 2008, as discussed above), but also reveals that the strategy is subject to other less severe but frequent periods of underperformance. The beta chart is also interesting as it shows that the value strategy does not consistently exhibit a positive beta against market moves, as many might believe.

Robert Shiller teaches courses to hundreds at Yale, lectures to full houses all over the world but Consuelo Mack was able to sit down with him for a one-on-one... Read More 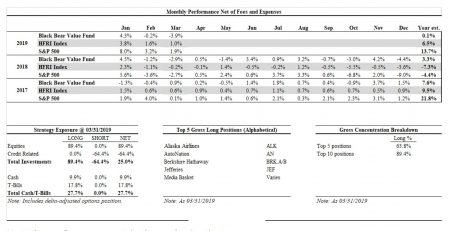 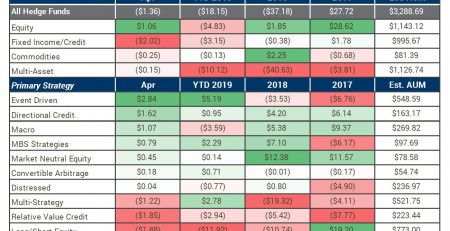 If you’re a large hedge fund firm that performed well in 2018, chances are 2019 is feeling like a very positive year

Executive Summary In the last eight months, investor flows to hedge funds have been positive only once, but that does not mean funds are not gaining new assets. If you’re... Read More

How Big Oil Took Over The Oil Market

Big Oil credit goes to Rigsource Inc. for this article. How Big Oil took over the oil market The term “economies of scale” might as well have been invented for the oil... Read More