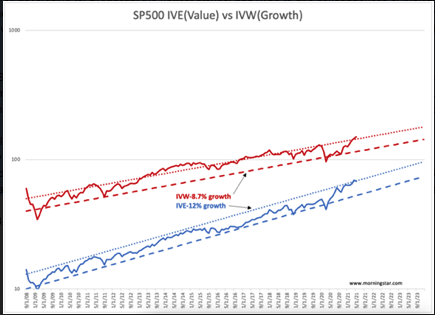 It is an oxymoron to say Value beats Growth if one listens to the media and the countless advisors claiming it is the other way around. Two charts, the monthly IVE vs IVW and the daily VOOV vs VOOG, help to clear the confusion.

First, the media thrives on maintaining/growing viewership it can sell advertising to. Broadcast the hottest stories, add hype to dire consequences or indicate that investors need to get-on-board the “New-New” thing does capture attention. The pace of delivery and delivering the same stories each time modified to sound a little different is part of the process. Having viewers believe that if they do not tune in frequently, they will miss information crucial to investment success is also a large part of the process. If one is investing using mainstream media as a primary information source, then you have my condolences. Investment information for higher returns originates elsewhere than the Growth issues touted daily.

The IVE and IVW chart represents the monthly price histories of SP500 issues separated into Value and Growth categories based on Revenue/Market Price Momentum screening. Long term IVE has grown ~12% vs IVW’s 8.7% with Value handily out-performing Growth. Over shorter periods, media attention on Growth issues have temporarily driven price expansion well ahead of fundamentals as we are experiencing with the concerns of COVOD on economic activity as seen in the daily VOOV vs VOOG data. Both, charts represent identical ETFs with IVE and IVW having a history from 2000 not available for VOOV and VOOG. 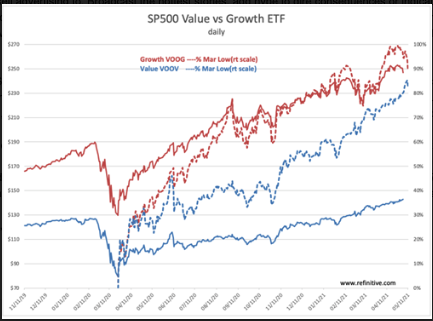 The heavy emphasis on growth began prior to COVID with multiple recession scares. The COVID impact boosted this focus. As economic activity normalizes, i.e. people return to work rather than stay-at-home, investors become aware that core US industrials which are vital to economic activity never disappeared and remain as vital as ever. Fundamentally important companies, the backbone of economic activity, comprise the Value indices and cycle back into investor’s focus. One of the reasons driving this ebb and flow is that there are enough failures in untested growth companies as screened by SP500 that as a group they underperform those deemed stodgy value companies. One reason value companies do better is that they have already been through their higher growth periods, been tested multiple times by stressful economic conditions and survived.

To Trust is Good, But to Control is Better: How Do Investors Discipline Financial Advisors' Activity Riccardo Calcagno EMLYON Business School; Center for Research on Pensions and Welfare Policies (CeRP) Maela... Read More

The emerging markets (EM) asset class has been especially disappointing for investors in the past few years [Figure 1], as measured by the MSCI Emerging Markets Index. However, last... Read More

JP Morgan Prime Brokerage: Global Macro Was The Only Strategy To Deliver Positive Returns In Oct

It is no secret that 2015 has been a tough year for hedge funds, but the latest research just shows how hard it is for funds as the year... Read More

Ron Muhlenkamp's letter to investors for the third quarter, July 2015. H/T Dataroma Economic news and domestic equity markets have been pretty quiet since we last wrote to you in April.... Read More