In their  latest episode of the VALUE: After Hours Podcast, Taylor, Brewster, and Carlisle discuss Warren Buffett’s UnBuffett-Like Trades. Here’s an excerpt from the episode:

Bill: Buffett said that he and Charlie would bet material portions of their net worth on a coin flip with the right odds. If you actually listened to that statement, that coin flip ends up a zero, roughly 50% of the time, unless it’s a weighted coin.

Bill: Yeah. So, there’s a lot of scenarios, where Buffett looks wrong, too.

Jake: Sure. I mean, that’s the whole insurance game.

Tobias: Yeah, I was going to say, it’s at least–

Tobias: That was how I interpret it, too.

Tobias: Yeah, I don’t think Buffett would do it.

Jake: Well, he’s done different. He bought a lot of Amex at one point, he bought a lot of GEICO when it was baby potentially– Both of those had potential zeros, maybe. I guess, he assessed that it wasn’t enough chance of that.

Tobias: I think Amex was a potential zero.

Bill: Also, with GEICO, he replaced management. He knew the new guy coming in. I think an error that I made when I studied Buffett when I was younger is, I didn’t realize the level of control that he insisted on when he got into really hairy situations. Maybe Amex is different, but he was never just some passive guy buying into total junk, I don’t think.

Jake: Oh, yeah. Dempster Mills going in, I mean, my favorite story of that is him in the warehouse, and he draws a line on the wall, and says, “If you don’t get the inventory below this line by this time, you’re all fired.”

Tobias: [laughs] That’s not very cuddly grandpa of him?

Jake: That’s not cuddly grandpa. By the end of that, the whole town hated him. So, I think he was like, “I don’t really want to do that anymore. That doesn’t feel good.”

Bill: Yeah, the part of the story that’s not told when they tell that part of the story is, not only did the town hate him, but he was also rich. I think knowing who he is, he would do it to get rich. But I don’t think he’d do it once he’s rich. I don’t know who he is, by the way, for those that misinterpret my statement. It was all based on the snowball and study.

Tobias: Amex wasn’t a limited liability when it was listed in the 60s? Shareholders could be exposed to unlimited losses. Is that true when he bought it?

Bill: That’s my understanding, but I could be wrong.

Tobias: It’s like the Lloyds. You remember that when Lloyds, famously the partners in Lloyds or whatever they call are liable down to their shirt buttons and they were looking at like they are going to take their first real loss in a long time, which is when they did the big reinsurance deal with Buffett to cover them from that scenario. But even Buffett, he only underwrites a portion of it. If it gets bigger than that, it’s unlimited beyond that. That would have made me nervous. What do they call them? The names of Lloyds.

Tobias: I didn’t know that about Amex. That would definitely have changed, because that was financial company with a big fraud going on as a tough to plunge into.

Jake: That surprises me that why would you run a company if you can get limited liability?

Jake: Yeah, there’s the argument of Goldman being run that way was probably run less aggressively.

Tobias: But they are not public. They can’t be public as partnerships. They all converted, so they could go public. I don’t know about Amex, though. I’ve never heard that before. There’s been a list of the some– [crosstalk]

Bill: Something beautiful about converting to go public and then incentivizing more risk taking. That’s a nice way to [crosstalk] the public.

Jake: It’s a bag holder recipe right there, isn’t it?

Tobias: Yeah, for sure.

Jake: Especially, on something like a bank, where you can take money today and give promises back. There’s lots of room for shenanigans there.

Tobias: Rudy Havenstein always points out that Goldman Sachs is a levered hedge fund until they took the bank holding company safe harbor in 2008, and then as soon as they did [chuckles] back to leave a hedge fund.

Jake: Yeah, it’s hard not to leave a little sour taste in your mouth watching that episode, huh?

Tobias: There’s two that we haven’t talked about. BYD. I don’t know how BYD trades. Is that an ADR? I think he’s bought the Hong Kong shares of that, hasn’t he?

Jake: I believe so.

Tobias: And it was also ChinaPetro. I remember that. The ticker is like CNOOC or something like that. He crushed on that one. That’s a very unBuffett like investment, too.

Jake: Yeah, he did pretty well on that one.

Tobias: I think it was a six bagger.

Bill: His OXY purchase is so interesting. Didn’t get long–? Was it wrangled or was it a Freeport Matt Moran coming out of the recession or out of 2020?

Tobias: They bought Barrick. They held gold for like– But it was only like it was one filing. It was a very small position that tipped up the next time around [crosstalk] one of the boys.

Bill: I was just thinking, like, when he bought into OXY, I was thinking like inflation, it doesn’t help insurance flows as the cost of replacement goes up. OXY is a pretty nice hedge to that risk.

Jake: Yeah. Raising rates should help insurance as book value returns on equity. So, it’s kind of a mixed bag.

Tobias: Keep rates low. That’s all they can do. That’s what they are going to do.

Bill: I think that’s ultimately what they have to do.

Bill: Yeah, the other side of it, the other side that that could imply is like this Lacy Hunt theory that years four through 10, maybe the 10-year looks like a really good bet. I don’t know. I’m freaking confused. So, any listener that can help me get unconfused, please hit me up.

Tobias: Me, too. That’s time, fellas.

It is now twenty years since the launch of the Russian Prosperity Fund and twenty-three years since I first started investing in Russia. Often, people ask me how the... Read More

Kerrisdale Commentary for Five Below Inc (FIVE) Part 2 As we described in our last article, Five Below Inc (NASDAQ:FIVE) trades at too high of a valuation for a discount retailer... Read More 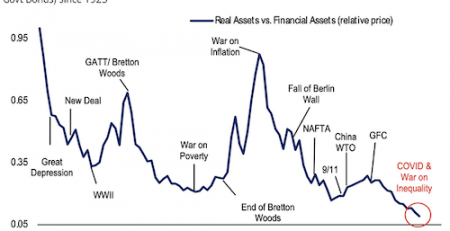 Copper Is The New Oil – OWTW

It turns out copper, not data, is the new oil: Q1 2021 hedge fund letters, conferences and more This prompted us to dust off an old Insider Weekly issue from March 2020, where... Read More

It’s not enough to hand over your money to the government anymore. Q4 hedge fund letters, conference, scoops etc Now you have to pay them for the privilege to do so. That’s... Read More

Investor and Forbes contributor John S. Tobey has a rather fatalistic view of artificial intelligence-based investing and trading regimes. In a recent article, the former professional investment manager who formerly... Read More

In 1986, Peter Munk bought a gold mine in northeastern Nevada for $62 million. Q4 hedge fund letters, conference, scoops etc PublicDomainPictures / Pixabay The mine was only producing 40,000 ounces of... Read More

Jeremy Siegel, Professor at University of Pennsylvania's Wharton school, spoke with FOX Business Network’s (FBN) Liz Claman about the stock market and his predictions for the future. When asked whether he... Read More