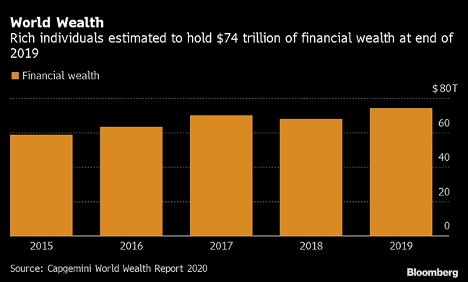 Even before this year’s market crash, the wealth-management industry’s richest clients were frustrated about fees.

A third of those with more than $1 million of investable assets were uncomfortable with them in 2019, according to Capgemini SE’s World Wealth Report 2020. Such discomfort will likely rise in today’s volatile markets. The survey of more than 2,500 individuals found that about one in five plans to switch their primary wealth management firm in the next year, with high fees the top reason.

Their main concerns were about transparency, performance and value received. They also said they preferred fee structures to be performance- and service-based instead of asset-based.

It’s the latest sign of the pressure the industry is under as clients balk at costs and digital competitors emerge. The majority of investors weren’t satisfied by the quality of personalized information they receive and about three-quarters of those surveyed said they would consider offerings from non-traditional providers like the big tech firms.

For the first time since 2012, the Asia-Pacific region didn’t lead wealth growth last year — it was North America. The U.S. alone had 5.9 million millionaires at the end of 2019, up from 5.3 million in 2018 and more than any other country. Japan followed, with 3.4 million millionaires, followed by Germany, China and France.

The Oakmark International Small Cap Fund returned 3% for the quarter, compared to 6% for the MSCI World ex U.S. Small Cap Index. The Fund performed well in both... Read More

Broyhill Asset Management letter to investors for the month ended August 31, 2015. “The easy money has been made.” This is a phrase you might hear hanging out among traders... Read More

This report analyzes an asset-weighted portfolio of the 30 largest reporting hedge funds to determine what market exposures, risk factors, and performance expectations this institutional portfolio would create for... Read More