Median Age Of The Population In Every Country – ValueWalk Premium

With a few notable exceptions, the world is rapidly aging.

Today’s infographic, which was shared by Bill Gates on Reddit, shows this incredible explosion in age and how different countries contrast with one another on this demographic metric.

While aging populations in Europe, North America, and Asia stand out on this type of visualization, it’s also important to look at the negative space. In both South America and Africa, populations are still quite young, with Africa getting younger and younger. 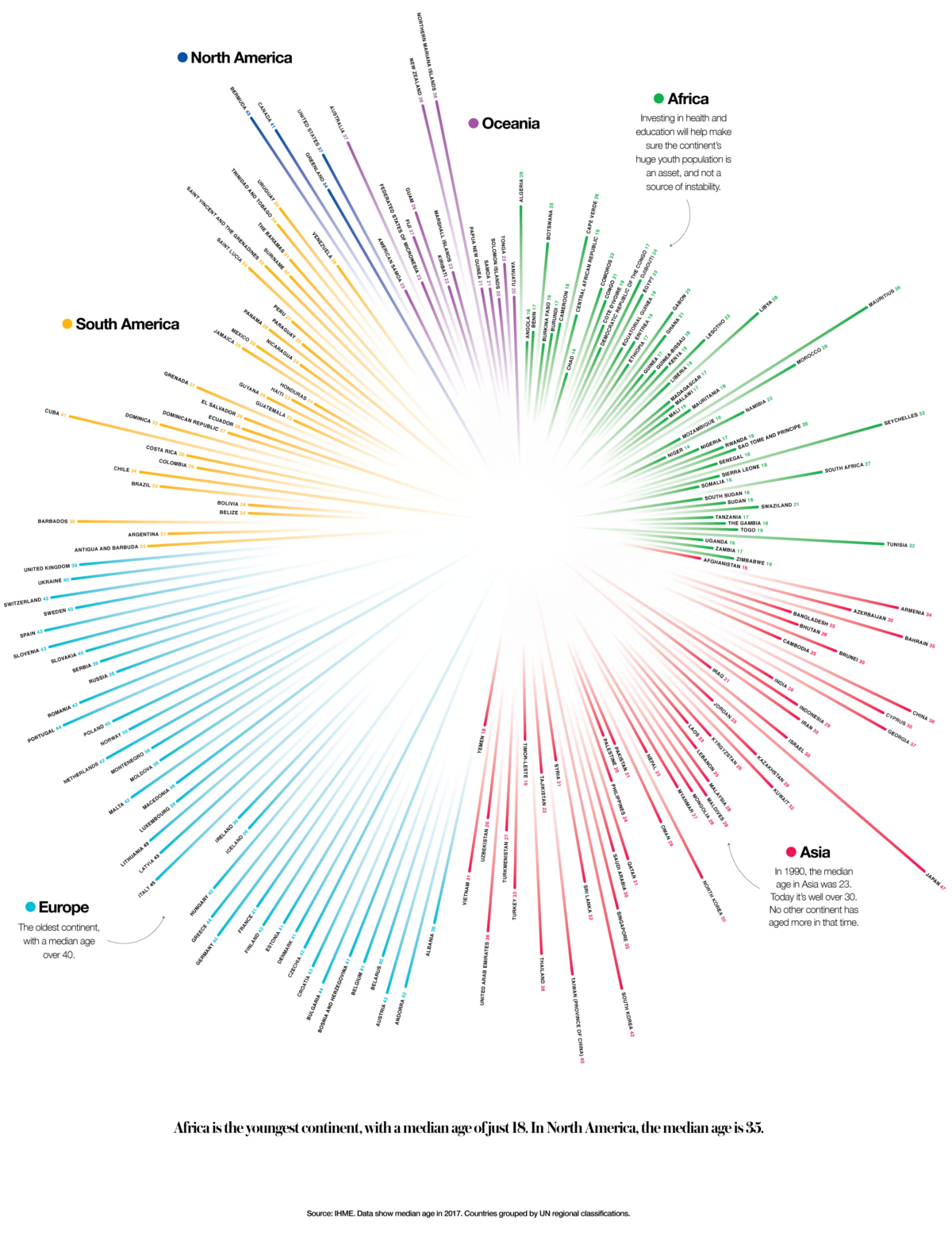 Which countries are the outliers in terms of global demographics?

Let’s start by taking a look at the oldest countries in terms of median age.

Japan takes the cake for the oldest population and it’s joined by a host of European nations.

The following countries tied for the #7 spot, which is just off of the above list: Austria, Croatia, Latvia, Lithuania, Slovenia, Spain, and Bermuda. All of these places had median ages of 43 years, with Bermuda being the only non-European state of this group.

It’s worth noting that some smaller countries appear to be excluded from Gates’ infographic. As we showed on our last chart covering the subject of median age, which uses a different data set, the small city-state of Monaco (which has a population of just 39,000 people) actually has the highest median age in the world at 53.1 years.

Now, let’s take a peek at the world’s youngest countries in terms of median age.

The youngest countries globally are Chad and Niger with a median population age of 14 years. Both are located in Sub-Saharan Africa.

The only non-African country is war-torn Afghanistan, where the median age is 16 years.

A variety of countries tied with a median age of 17 years old, which puts them just off of the above list. Those countries include: Benin, Burundi, Ethiopia, Madagascar, Malawi, Nigeria, Tanzania, Zambia, Yemen, and Timor-Leste.

Want to get an even better idea of what the world looks like as it ages?

To get a sense of change over the coming decades, it’s worth taking a look at this animation that shows median age projections with a focus on Western countries all the way until the year 2060.

12 Jobs With The Highest Pay Increase In 2016 by Emolument Bankers? Techies? Consultants? Who has seen their salary increase the most in 2016? With banks getting further into the financial... Read More

Federal regulators announced that Egan-Jones Ratings Co and president, Sean Egan, filed official documents that exaggerated their expertise when it comes to credit ratings.  The SEC said that the... Read More