Sheila Bair: Get Rid Of Fannie Mae And Freddie Mac

Forbes named her the second most powerful woman in the world in 2008 and 2009. Said to be “thoughtful, practical, independent-minded—a straight shooter with political savvy” (in the words of Steven Pearlstein, Pulitzer-prize winning Washington Post columnist), Sheila Bair was the chief of the Federal Deposit Insurance Corporation (FDIC) when the financial crisis unfolded in 2008. Along with Hank Paulson, Ben Bernanke and Timothy Geithner, she was a part of the A-team that engaged with the massive economic challenges from the financial meltdown.

Silk Road, a website that was used to buy and sell drugs, murder contracts, and other illegal services, has been seized by the FBI and alleged admin Ross Ulbricht... Read More

China: The Most Dangerous Place To Work In Finance

If you don't understand what's going on in China, you're not alone. Even though the country is constantly in the headlines and will soon overtake the US as the... Read More 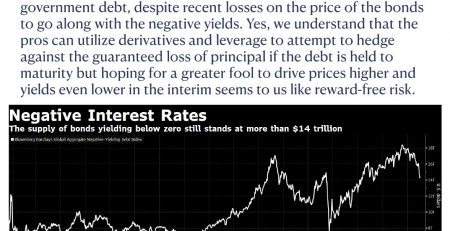 John Buckingham's presentation titled, 'Busting the Myths & Seven "Valuable" Themes for 2021'. The webinar  for ValueWalk Premium members took place on 2/23/2021, and was followed by a Q&A.... Read More

This Tesla bear who made a profit betting against Musk in 2019 is done shorting the stock; here’s why (In-Depth)

Continued from part one... Q1 hedge fund letters, conference, scoops etc Abrams and his team want to understand the fundamental economics of every opportunity because, "It is easy to tell what... Read More

Groupon Inc (NASDAQ:GRPN) took its shareholders on a wild ride today. The company's stock is up by more than 8% at time of writing, and stock has been rising... Read More

IEX Group announced Wednesday that it has raised $75 million from firms such as Bain Capital Ventures and Spark Capital, and the funds would facilitate its efforts to become... Read More

Key takeaways from Geoff Morgan's  Financial Post piece: Badger took 1.5 months to call a reporter back and then lied to him. BAD still has not answered the questions—even... Read More

Peter Cundill was a Canadian investment star who helped shake up the Canadian money management industry. Like many of history's best value investors, Cundill is relatively unknown outside of... Read More