The UK unemployment rate has fallen to the lowest level in five years, dropping just below the 7.0% threshold that the Bank of England had set for when it might consider raising interest rates, reports Richard Barley for The Wall Street Journal. But that doesn’t mean the BoE is eager to do so – it had assumed that 7% unemployment was still a few years away instead of just eight months when Bank of England governor Mark Carney (who was new to the job at the time) tied interest rate . . .

From WIRP to ZIRP to NIRP and  Finally BIRP by Joseph J. Ori, CPA, CFA As many of you know, the interest rate policies of all of the central banks around... Read More

Google is reportedly being blocked in China as the country approaches the anniversary of the Tienanmen Square uprising. Multiple sources report blocking of Google services While the communist country has not... Read More

The attack by hackers who hit JPMorgan Chase & Co. (NYSE:JPM) was apparently broader and more sophisticated than first reported, as they are now said to have used computers now linked to... Read More

Continued from Part I... What constitutes an illegal pyramid scheme? While many surrounding the issue appear to have conflicting interpretations, a source close to Herbalife told ValueWalk their version of truth on... Read More 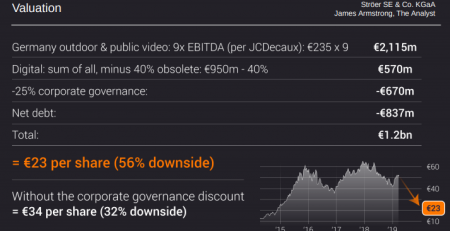 In 2010, Stroer SE & Co. KGaA was a "boring outdoor advertising business in Germany" according to James Armstrong, the senior analyst at independent research outfit, The Analyst. In... Read More