The conventional justification for alternative investments has been their ability to effectively diversify against core equity and fixed-income allocations. But, in many cases, the empirical data doesn’t lend much support to that view. A new fund provides a different way to obtain returns from sources that have low to negative correlation to stocks and bonds, as well as each other – an alternative to alternative investment vehicles.

Traditionally, portfolios have been dominated by public equities and bonds. The risks associated with the equity portion of those portfolios are typically dominated by exposure to market beta. And because equities are more risky than bonds, beta’s share of the risk in a traditional 60/40 portfolio is actually much greater than 60%. In fact, it can be 80% or more.

The severe financial crisis of 2008 led many investors, including institutions, to search for alternatives. Among the usual suspects were private equity and hedge funds. Unfortunately, evidence demonstrates that the correlation to equities of both these alternatives is quite high. For example, Niels Pedersen, Sebastien Page and Fei He – authors of the study “Asset Allocation: Risk Models for Alternative Investments” from the May/June 2014 issue of the Financial Analysts Journal – found that the correlation of private equity and hedge funds to stocks was 0.71 and 0.79, respectively. Most of the returns to those types of alternative investments are explained by their returns to stocks (the same beta risk they are trying to diversify). This is the same conclusion that Cliff Asness, Robert Krail and John Liew reached in their 2001 study, “Do Hedge Funds Hedge?”

Making matters worse, alpha has proved very elusive. The historical evidence on the performance of private equity and hedge funds is not good, a fact presented in my book The Only Guide You’ll Ever Need to Alternative Investments. Other traditional alternatives, such as real estate investment trusts (REITs) and infrastructure, also have a relatively high correlation with stocks. Among traditional alternatives, the only two that showed almost no correlation to stocks were commodities and timberland.

For investors seeking other alternatives, AQR Capital Management recently introduced the AQR Style Premia Alternative fund (QSPIX).1 The goal of this fund is to capture four premia that many investors desire – value, size, momentum and defensive.

Traditional long-only mutual funds capture only a portion of the desired premia and leave their portfolios dominated by beta. QSPIX, however, is a long-short fund able to capture more of the premia. It invests across four styles (or factors), each of which is supported by the academic literature. Thus, the fund allows investors greater exposure to factors that have delivered premia without having any net exposure to beta (equity risk). Each of the four styles is backed by both economic theory and decades of data showing long-term performance across geographies and asset classes.

The best-known statistical framework for estimating the equilibrium funds rate is the Laubach-Williams model, a new research report from Goldman Sachs points out.  But that model has “limitations,” the... Read More

HSBC's respected Chief Economist Stephen King, sporting spiky hair that would land him in jail or worse in Iran, penned a much discussed economic report that reads like a... Read More

Chesapeake Energy Corporation (NYSE:CHK) has received an upgrade from JPMorgan Chase & Co. (NYSE:JPM). The natural gas and oil exploration company has been rated “overweight’ by JPMorgan. This is a... Read More 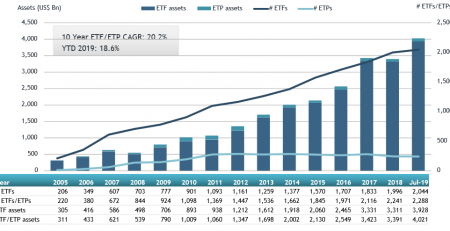 ETFGI reports assets invested in the US ETFs and ETPs industry broke through the US$4 trillion milestone at the end of July 2019 Q2 hedge fund letters, conference, scoops etc LONDON... Read More