The relationship between future returns and stock and bond market yields.

Tune to CNBC or the like for more than about 15 minutes, and you will hear a strategist, portfolio manager, or market pundit of some stripe explaining that the high market multiples of recent times are justified by low interest rates and/ or inflation. “Well, Maria, you have to understand-stocks might look expensive, but that is fine because interest rates and inflation are low.” Or so the refrain goes. In fact, to many on Wall Street and in the financial media this assertion has been elevated to the status of conventional wisdom.

The most Widespread version of this comparison of stocks to bonds is often deemed the Fed model. This model, allegedly found in the annals of a Fed report, not named because of any official Fed endorsement, comes in various forms, but generally asserts that the stock market's earnings yield should be compared to current nominal interest rates (the earnings yield, or E/ P, is the inverse of the well-known price-to-earnings ratio or P/E).

Letting Y represent the yield on ten-year Treasuries, the model says we should look at E/ P versus Y. In its simplest form, it asserts stocks are cheap when E/P exceeds Y, expensive when Y exceeds 13/ P, and fairly valued when Y and E/ P are equal.

Even pundits who are united in their belief in the Fed model do not always agree on what it is telling them. Of course, as recent times make clear, the E in E/P is not a simple observable number. In addition, some adjust the basic comparison of E/ P and Y for a growth assumption or a required equity risk premium, or change the functional form of the relationship.

The basic widespread core belief implied by the Fed model, though, is that the stock market’s E/P must be compared to Y, and that low interest rates permit a low E/P or, equivalently, a high market P/E (and vice versa). It is this core belief (whether or not it is labeled the Fed model) that I study here.

The evidence strongly suggests that the Fed model is fallacious as a tool for long-term investors. Essentially, the comparison of E/ P to Y is erroneous as it compares a real number (P/E) to a nominal one (Y). The important point is that the stock market’s P/ E does not have to move with inflation since nominal corporate earnings already do so. Empirical evidence supports this theory. Investors forecasting future long-term stock returns would do much better relying on simple P/E, or the like, rather than the Fed model?

The good news for income seekers is that the Donald Trump election will push up the US 10-year Treasury yield to 2.5% for the first quarter of 2017. The... Read More 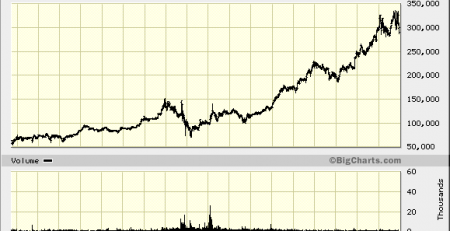 Big Mistakes: The Best Investors and Their Worst Investments by Michael Batnick A Stoic would agree with this quote from the above book: The most important thing successful investors have in... Read More

Apple Inc. (NASDAQ:AAPL) has been on the limelight for all the good reasons in the recent past with record breaking preorders, as well as massive price target revisions from... Read More