[Archives] Regression To The Mean And Value Investing – ValueWalk Premium

[Archives] Regression To The Mean And Value Investing

Regression To The Mean And Value Investing via CSInvesting

The child inherits partly from his parents, partly from his ancestry … The further his genealogy goes back, the more numerous and varied will his ancestry become, until they cease to differ from any equally numerous sample taken at haphazard from the race at large … This law tells heavily against the full hereditary transmission of any gift … If it discourages the extravagant expectations of gifted parents that their children will inherit all their powers, it no less discountenances extravagant fears that they will inherit all their weaknesses and diseases.

Sir Francis Galton Inquiries Into Human Faculty and Its Development (1883)

Leithner & Co. is a Graham-style “value” investor. Benjamin Graham (1894-1976) was the author of the classic books Security Analysis (1934) and The Intelligent Investor (1949), a director of Graham-Newman Corp. (1926-1955), an instructor at Columbia University and a mentor and colleague of outstanding investors such as Warren Buffett, Thomas Knapp and Walter Schloss. He is widely regarded as the founder of financial analysis. Graham’s key insight is the premise that “investment is most successful when it is most businesslike. An investment operation is one which, upon thorough analysis, promises safety of principal and a satisfactory return. Operations not meeting these requirements are speculative.”

Graham sharply distinguished two critical notions: price is what is paid and value is what is received. He observed that at any given point in time the value and the price of a financial asset often diverge (sometimes by a wide margin), but that over time they gravitate towards one another. Value investors, as practitioners of Graham’s approach are often called, thus reject today’s prevailing view that the price and value of a security (i.e., stock, bond, title to real estate, etc.) necessarily coincide at all times. Graham lamented that most people rarely recognise, and more than a few wilfully ignore, the fundamental difference between – and relationship among – value and price. He regretted, in effect, that a foundation notion (“regression to the mean”) is often discounted or ignored entirely by most market participants.

Sir Francis Galton (1822-1911), a cousin of Charles Darwin, was keenly interested in heredity and not at all in business and finance. Yet his studies of “the average ancestral type” uncovered a statistical regularity that provides a basis for Graham-and-Buffett style value investing. Heredity is the transmission of key characteristics, such as height, weight, eye colour, susceptibility to and protection from certain diseases, etc., from parents to offspring. The study of heredity takes into account “outliers” – individuals whose characteristics do not conform to the group’s norms – but its focus is upon the basic tendency of all members of a species to resemble one another.

Consider peas in a pod. In 1875 Sir Francis conducted an experiment proposed to him by his cousin. After weighing and measuring thousands of sweet peas, ten specimens of each of seven categories of weight were sent to nine associates across the British Isles, including Darwin, who were instructed to plant the peas under carefully specified conditions. After analysing the results, Galton found that the spread of weights and diameters among parent peas within a given category was slightly wider than the dispersion among their offspring. The offspring of peas from each category of weight, in other words, had an overall distribution that was slightly tighter than the distribution of their parents. In an analysis of the heights of human parents and their children, Sir Francis found that tall parents tended to bear tall children and that short parents tended to bear short children. Heredity clearly matters. But it matters in a particularly interesting way: on average, the offspring of tall parents were not as tall as their parents; and the offspring of short parents were not as short as theirs. These and other experiments led Sir Francis to formulate a principle that has become known as reversion (or regression) to the mean.

According to Galton, “reversion is the tendency of the ideal mean filial type to depart from the parental type, reverting to what may be roughly and perhaps fairly described as the average ancestral type.” If this process of reversion were not at work, i.e., if large peas produced ever-larger peas and small peas produced ever-smaller offspring, the world would eventually comprise nought but midgets and giants. With every passing generation nature would produce ever more freaks and extremes. More generally, “regression to the mean” refers to an inverse correlation among roughly normally distributed observations that are made repeatedly over time. An extreme observation at one point in time (“outlier”) tends to be followed by a less extreme observation; extremes, in other words, revert or regress over time towards mean or average measurements. Consider as another example a student’s test scores. If the student’s scholastic aptitude remains constant over some (say, six-month) period of time, then an extreme test result observed at a particular point will probably be followed by (“regress towards”) a result that is much closer to the student’s average. All else equal, an abnormally high score is likely to be followed at the next test by a lower score; and an abnormally low score is likely to be followed next time by a higher score.

Back on March 23, it seemed like stocks would never stop falling. Congress was struggling to pass stimulus, coronavirus cases were climbing, futures were pinned to their bottommost tick... Read More 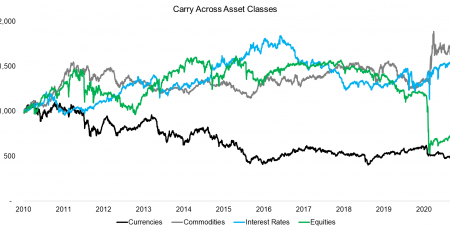 OMV AG (ADR) (OTCMKTS:OMVKY) (ETR:OMV) (FRA:OMV) announced this morning that it has acquired the North Sea assets of the Norwegian company Statoil ASA (NYSE:STO) for USD $2.65 billion. The... Read More